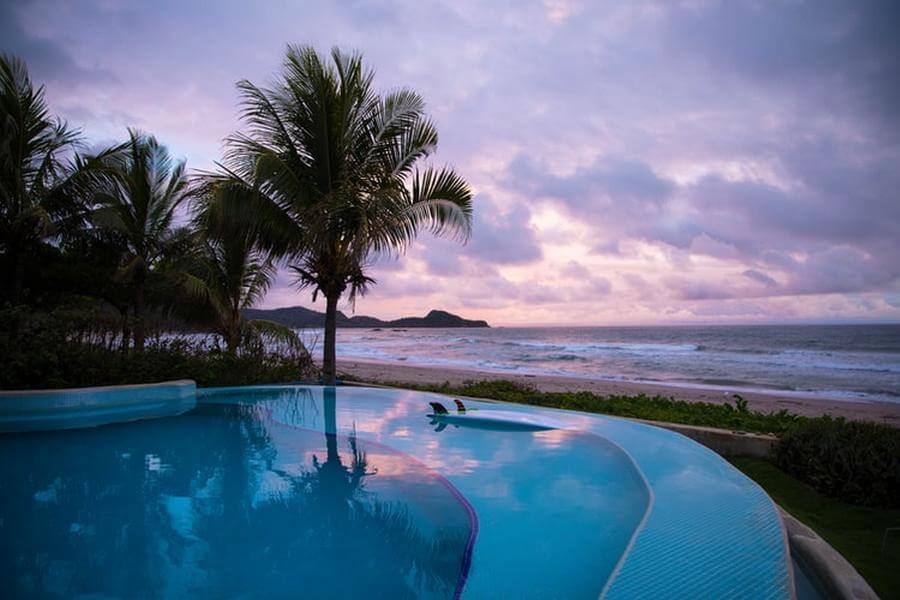 Swimming is a timeless activity that is a great way to cool down on a hot day. All over the world, people enjoy swimming. However, some people prefer swimming in a pool while others enjoy propelling themselves in the ocean at the beach. Is one really better than the other? Beaches tend to be a better choice over pools, but why?

Pools are either loved by people or hated. They are loved by people who don’t want to go into ocean water. This could be due to the marine life that can be found in ocean waters. People shouldn’t be afraid of the beach, however, some people are more comfortable in a pool environment.

Those who hate pools generally hate them because they aren’t always seen as clean. Lots of people collect in a centralised place to swim and it isn’t that appealing.

Reasons Beaches Are Better Than Pools

is a harsh chemical that is used to kill bacteria. It is often used in pools to eliminate bacteria that are brought in by people. Because pools are smaller than the ocean and are more concentrated, bacteria can build up faster. The ocean at the beach doesn’t have chlorine which is a bigger appeal to people as well.

Chlorine, in higher amounts, can be really harsh on the skin and hair of humans. If a pool is properly maintained, the chlorine levels in a pool shouldn’t be too excessive. So while most pools aren’t going to be an issue, chlorine still isn’t an attractive chemical to think about swimming in.

There’s More To Do At The Beach

Pools are pretty generic. They are surrounded by concrete and lounge chairs. When people head to the pool they are limited in what they can do. They either swim, float around or sunbathe.

At the beach, there are practically limitless things to do. There’s sand to play volleyball or build a sandcastle, there’s plenty of water to swim or float in, and there’s space to jetski or go boating. Additionally, there are opportunities to go fishing at some beaches as well and collect seashells.

With so many options, visiting the beach over going to the pool is an easy choice for people. A beach is a great place for a family of any size, couples, or individuals which also makes it quite diverse.

Pools generally have limited space both in the area surrounding the pool as well as the water itself. So heading to the beach is a more comfortable choice that also yields so much more to do!

Beaches have a natural beauty to them. There is something quite tranquil about incoming waves, the open sky against the horizon and the salty air. All over the world, beaches are sought after for their stark beauty. From bright blue waters to pristine white or golden sands, beaches are simply more attractive than pools.

Pools are typically rectangular or circular in shape surrounded by boring decor. While some places do attempt to bring a little bit of nature to the poolside by adding flora or tropical gardens, these are man-made creations that aren’t naturally occurring.

There’s something more intriguing about naturally occurring scenery that beholds the eye. There’s nothing artificial about nature! The beach certainly delivers natural beauty!

The Sand At The Beach Is Gorgeous

Beach sand is one of mother nature’s greatest contributions to beaches. When larger minerals or stones are broken down by erosion (either wind or water), sand is formed. The ocean is an ever-moving mass that is constantly exposing materials to erosion.

The sand that is washed up on shorelines all over the world is the product of ocean water erosion. This fascinating process really showcases how interesting sand is. Pools are man-made and don’t have gorgeous sand.

Because the process of erosion creates sand out of nearby minerals or stones, every beach is uniquely it is own. This truly makes beaches a natural wonder of art, setting them apart from basic pools that are found in town communities or at hotels.

These are just some of the most basic reasons why beaches are better than pools. There will always be pro-pool and pro-beach people but seeing reasons why the beach stands out a bit more than pools is always interesting!

Similarities Between Beaches And Pools

Pools And Beaches Can Be Deep Or Shallow

Pools and beaches share the fact that their waters can be shallow and deep. Shallow water is generally found at the shoreline of a beach and pools have a man-made “shoreline” where the shallow water begins the entrance to a pool. Beaches and pools also have deep portions as well.

While pools obviously do not have extreme depths like the ocean, they are still deep enough to allow for swimming. This is the biggest common thing between a beach and a pool.

Beaches And Pools Both Contain Saltwater

Pools typically contain freshwater. However, some hotels around the world have saltwater pools. These types of pools help to create the illusion of a beach vibe. Moreover, salt can kill bacteria, just like chlorine. However, it is important to note that saltwater pools aren’t chlorine-free.

Salt cannot kill all forms of bacteria and some chlorine must still be present.

Beach water is naturally a saltwater source so swimming in a pool that has been converted to a saltwater pool is a thrilling experience for some. For others, it seems like a cheap shot at trying to make pools more like the ocean.

This isn’t an unfair argument but saltwater pools still seem to be a popular choice for some locations around the world.

Pools And Beaches Are Great For Exercise

Swimming is an excellent way to get in daily exercise. The act of swimming forces all the body’s muscles to move at the same time to propel the body through the water. Whether someone is swimming at the pool or the beach, they are going to get a decent amount of exercise in!

This is true even if they are swimming recreationally and not doing laps. The beach has a slight advantage on the exercise front because there is the sand as well where people can run or play sports, however, in the grand scheme of things pools and beaches share the ability to provide exercise!

They Can Both Have Pristine, Blue Waters

Beach water isn’t always dark. Some places around the world have ocean water that is transparent and crystal blue in colour. Pools are also known for this feature, however, pools get their blue appearance due to their pool liners at the bottom of the pool.

Regardless, the blue hue is something that both bodies of water can share.

Beaches and pools might not share many similarities but they still have some key features! Between exercise, saltwater, blue waters, and various depths, they can sometimes be compared!

Which Is Cleaner: Beach Or Pool?

There’s always a little bit of debate about what’s cleaner, a beach or a pool. Pools undergo treatment with chlorine to kill any unwanted bacteria. Ocean water at the beach has its own natural bacteria killer: salt.

However, it is important to remember that salt doesn’t kill every form of bacteria whereas chlorine might attack most forms of bacteria. But is this enough to make a pool a better choice for swimming?

The short answer is that it all comes down to people’s preferences. Some people will feel cleaner in a pool while others will feel cleaner in the ocean. People who prefer pools to ocean water would argue that pools don’t have weird ocean creatures and lack salt water which can be harsh on sensitive skin.

Chlorine can be harsh too, but most pools aren’t going to have high levels of it.

Pools also have the matter of people relieving themselves in the water. While this is gross to think about, it is an unfortunate reality. The chlorine does help clean the water but at the end of the day, swimming in water where someone might have relieved themselves isn’t pleasant.

Sure, people can do the same in the ocean but the ocean washes it out to sea whereas the pool water is collected in one place.

For those who prefer ocean water, ocean water is a constantly moving source of water. Unlike lakes or ponds where the water sits still, the ocean moves on and on (endlessly it seems!). Because of this, the water isn’t necessarily dirty.

Crystal-clear ocean waters also appear cleaner than other parts of the ocean in the world. While there are sea creatures in the water, they aren’t necessarily “dirtying” the water but some would think that they are.

The bottom line in the debate of which is cleaner is that both can be clean options. Overall, someone’s preference for ocean water or pool water is what really sets the bar for what they feel is cleaner for them.

Why Is It Easier To Swim In The Sea Than In A Pool?

This includes things like tides, waves, and currents as well as various sea creatures that might be obstructing the water (although this isn’t generally an issue). People can get more exercise by swimming in the sea than in a pool.

In a pool, swimming is pretty easy because it is undisturbed water that is easy for laps or freestyle swimming. While swimming in the ocean isn’t necessarily easier in terms of the actual act of swimming, it is easier in other ways.

Seawater is more accessible than pool water. Not everyone has access to a pool whereas public beaches are always available (although swimming at night is never advised!).

Another way that swimming in the sea is easier than swimming in a pool is because there’s more space. There is more area of water to spread out and swim in than a pool has. Some beaches do have marked-out swimming areas that are placed to keep beach swimmers safe, however, these areas are still more spacious than swimming pools.

The world will always have pool people and beach people but honestly, the beach is a better option. There is so much natural beauty at the beach as well as so much more to engage in!