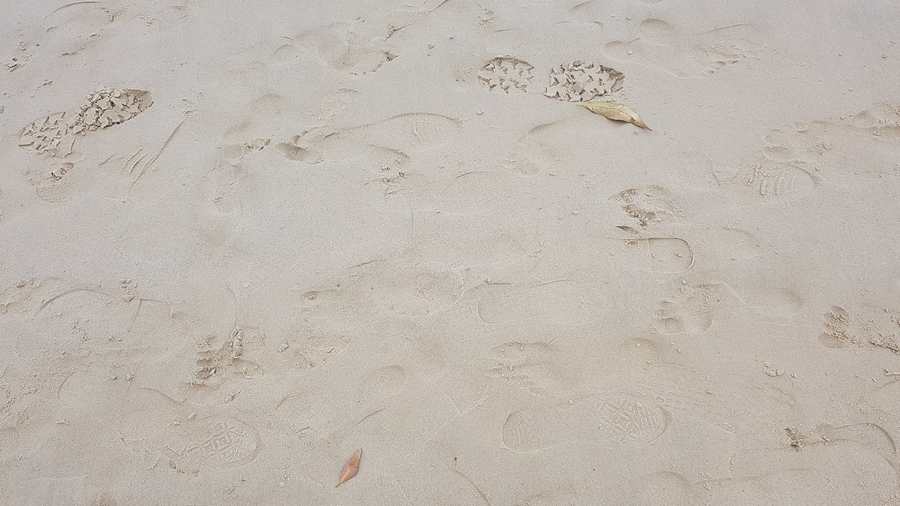 Sand is a familiar thing to everyone as it is found on beaches and in the desert. It comes in a variety of colours and the colour that it is showcases where the sand might have come from.

Additionally, sand can vary in its texture as well. Some sand is really fine while others are very coarse.

While sand is a familiar substance that we find all around the world, not many of us really think about how sand is formed.

Sand is made when tiny rocks are eroded by water. Erosion is when a material is broken down by wind or water. In this case, sand is usually made from erosion by water. The ocean carries all kinds of materials through its currents these end up on our beaches in the form of sand that we walk on.

The repeated exposure to turbulent currents, riptides, etc is what breaks down the rock fragments into what we know as sand.

The ocean is a continuously moving body of water. As it breaks down rocks it also washes these rocks upon shorelines all over the world. Depending on what type of rock sand is made from will determine where it came from.

For example, beaches generally have sand that consists of eroded rocks from nearby headlands or rock formations.

This is because the ocean is constantly crashing into these formations and collecting tiny fragments of rock that eventually erodes down.

Erosion usually takes thousands of years. The beaches that we see today were formed a really long time ago from those rock materials washing ashore.

So chances are, there isn’t any newly eroded sand that will be found on most beaches. However, it is really incredible how water is able to tumble rocks into the material we know as “sand“.

Sand that is found in the desert has two ways that it might have been formed.

Considering that erosion can occur by wind or water, it is possible that sand in the dessert was brought to remote areas by wind breaking down the surrounding rock formations.

Moreover, throughout many, many years, it is also plausible that desert sand could have been brought in by streams or river beds. Either way, it is fascinating to think about sand in the desert as well as beach sand!

So what types of rocks form the most sand? Once again, the sand that is found around the world is generally composed of rocks or minerals that aren’t too far away.

However, it is important to note that the weather and ocean are unpredictable, so in theory, sand could travel great distances. Below are the common materials that sand is made from!

Common Materials That Sand Is Made From

These are the most common materials that most sands are made from. The sand in the desert or on the beach can be made from these materials, however, most commonly they will be eroded quartz.

Why Is Sand Important?

Even though most people associate sand with the desert or the beach, sand can exist in other environments as well. This particular pertains to different soils from all over the world.

Once again, erosion is what creates the sand that is then carried to various locations either by wind or water. But why is sand so important?

Sand plays a critical role in many parts of our lives that we wouldn’t think about. Sand is considered a valuable resource in the manufacturing of such products like computer chips (where quartz is used) and glass.

Sand is also important in the construction world as it is used to form concrete. Generally, concrete will be made from sand that is from limestone or granite sand particles.

The use of sand in the construction world is what is used to make highways, city roads, buildings, and other infrastructures throughout our society.

As the world continues to develop, the demand for sand continues to be at an all-time high. This could be considered concerning for some people as eventually, like other resources, it could be depleted.

There have been speculations of lowering numbers in the availability of sand and gravel as recent as 2017.

However, while there could be some truth to this, it is important to realise that the ocean and wind are still constantly eroded various materials.

This is relieving to think about, however, sand takes thousands of years to develop. The process simply isn’t that quick. Throughout the world, experts have warned against over mining this resource to help preserve what is left.

Why Is It Called “Sand”?

Sand is called “sand” because it describes the fine texture of the material. In Old English, the word “sand” originated

It was used to describe the areas of softer surfaces found around riverbeds. So, interestingly enough, it seems the word and concept of its meaning didn’t really originate near a beach as some people would expect.

Because sand got its namesake due to the texture of the material itself, it is important to know the various levels of sand. Sand isn’t just one basic type of material.

It can vary in granular sizes which determines how fine or coarse the sand really is.

Since water is ever-moving and is one of the ways that sand is formed by erosion, the sand on a shoreline, for example, will be much finer than more inland sand because it has constant exposure to the tides.

Below is a basic description of different levels, or sizes, of sands that exist in the world.

This measurement scale really showcases the various sizes that sand granules can be. Depending on how long it is exposed to wind or water will determine just how large the particles end up being.

Can Sand Be Man-Made?

Since the mining of sand as a resource is highly-debated as endangering the world’s natural production of sand, engineers have come up with a way to make sand.

So yes, sand can be man-made. But how? The process is a little complex, however, it has proven to help save on the mining of natural resources.

This is typically done with small stones that can be ground in the sand. So, basically, man-made sand could be described as “forced erosion”.

This means that humans are creating the process of erosion manually instead of relying on nature to go through its own process.

During the process of making man-made sand materials, it has been found that the sand made manually is generally stronger than naturally found sand.

How is this possible? Man-made sand materials are processed in a controlled environment. Because of this, the texture is completely controlled and not affected by weather events.

Natural sand is constantly exposed to water or wind which continually breaks it down and makes the sand that is found in nature to be more inconsistent.

Man-made sand is more consistent due to the controlled environment in which it is made. As a result, man-made sand is being used more and more for the construction industry because it is simply a stronger resource.

Collecting sand is illegal. It is considered a crime and theft in most parts of the world. This is especially true for areas of the world where some beaches are part of protected national parks.

People are often tempted to steal sand to sell on the black market. It might seem strange to some people, but this is absolutely an issue! Because of this, the fines for collecting sands can be quite astonishing.

For example, in Hawaii, sand collecting is fined

at around $100,000 (US dollars). In Italy, it means jail time and fines of around 3,000 Euros. These are some examples and laws are changing all of the time.

So it isn’t worth risking jail time or a tremendous fine to collect sand.

These fines and jail sentences are set into place not only to discourage people from selling sand on the black market but to also help preserve the natural landscapes in which sand is found.

Industrialization is a huge problem throughout the world and when there’s an opportunity to protect what naturalistic surroundings there are, it should be taken quite seriously.

This usually is associated with wildlife, however, it is important for resources too such as sand.

Sand is such an incredible material that is found in all corners of the world. It truly plays an important role in society and through man-made sand materials, the Earth’s various beaches and deserts can remain undisturbed for years to come.