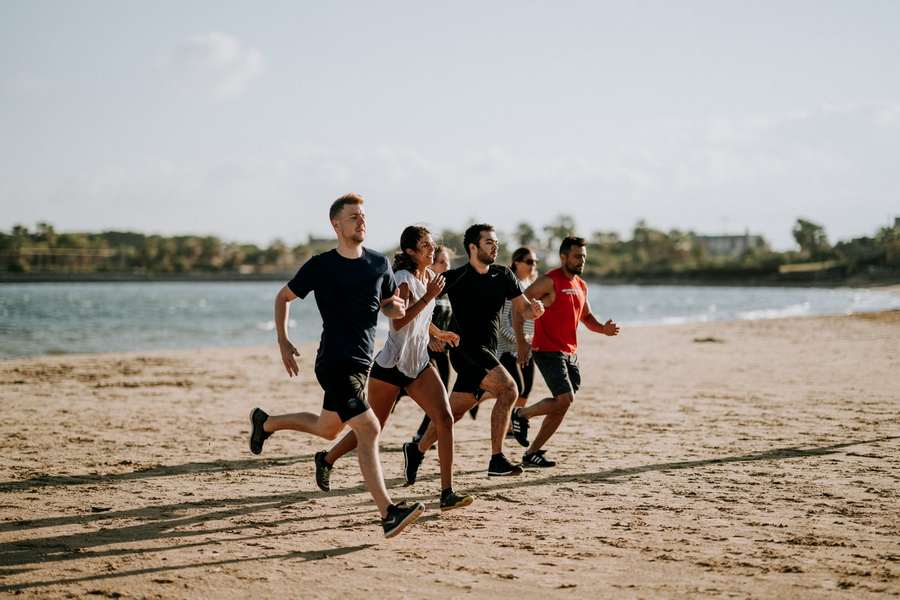 People tend to love beaches for their iconic sunset views of the vast ocean and idyllic sandy shorelines. However, the views at the beach aren’t the only reason they are popular.

Exercising is a key activity that takes place on beaches all over the world. Exercising at the beach generally means walking along the shoreline or running. Running is especially popular.

Running, in general, tends to provide excellent exercise and the beach showcases a great platform in which to partake in it!

Whether it is a morning run or an evening run, running along the beach is considered great exercise. Running is considered a cardio exercise, meaning that it is an effective way to shed some unwanted pounds. Sand offers a lower impact workout on your body’s joints but you can still work out hard.

However, there is more to running on the beach than just strapping on running shoes and heading to the shoreline.

Is Taking A Run On The Beach Good For You?

Some people question whether or not running on the beach is good or bad for you. The general answer for this is that it is considered good for you. In fact, it has some great benefits as well.

It is no secret that running is hit or miss in how it affects such joints as the ankles and knees. It is true that running can affect some muscles negatively. However, in most cases, this could be because the person isn’t in good shape.

requires a moderate level of fitness. While there are still some stresses on some muscles, they aren’t nearly as terrible.

Beach running is better for people over pavement running because the sand works to condition different muscles.

Because of this, beach runners are less likely to experience impact-related injuries that can come from running on other surfaces.

The sand literally acts as a gateway to an in-depth workout without the stress that some surfaces can produce.

Moreover, it is smarter to run on the dry, softer sand rather than right against the shoreline where the sand is packed tightly with water.

This is because the dry sand is going to create a more balanced workout surface instead of being a one-dimensional hard-packed surface.

Beach running absolutely requires the sand to be flexible.

What Are The Benefits Of Running On The Beach?

Below are the benefits associated with taking a well-paced run on the beach!

Running on the pavement on harder surfaces can cause injuries to muscles due to the overuse of them.

Simply put, this can cause more strain on the muscles because harder surfaces create a harder impact on a runner’s body.

Sand, especially the sand further from the shoreline, will provide a better surface in which to run.

2.Less Risk Of Muscle Inflammation Or Fatigue With Beach Running

The sand being so flexible under a runner’s foot is truly a huge benefit. The sand itself has proven to cause less muscle inflammation or muscle fatigue.

This means that runners can run a bit longer along the sanded surfaces than they can along harder surfaces like grassy areas with packed soil or pavement.

3.Simply A Better Workout Try A Run At The Beach

Because sand is a bit more uneven and shifts around, running on these surfaces causes a runner to push themselves a little harder to achieve a great workout.

Because they are working harder, their bodies are getting a better workout. While the sand can provide a longer workout for people looking to expand their running sessions, a sandy surface is also a great choice for a shorter, low-impact run as well.

Because the runner needs to work a bit hard to get themselves through the sand, they can achieve more exercise in less time or the same amount of time as a regular run.

It is estimated that running on the soft, dry sand will increase workout intensity by 10%.

Even sand near the shoreline is considered softer than grass or pavement and still provide a workout that is anywhere between 5 to 10% increase of intensity.

While that doesn’t seem like much, those smaller percentages truly do add up in the grand scheme of things.

Running does impact muscles in some way. Running on harder surfaces has always had a little bit of debate behind it on whether or not it is good for the knees, ankles, etc.

Studies have shown that running on the beach can help strengthen certain groups of muscles. These include glutes, hamstrings, hips, and ankles.

Because the sand requires more energy exertion from the runner, these muscles see the most benefit from a run on the beach.

5.The Beach Provides Variety To A Running Routine

While running on hard surfaces tends to have a bad rep for people’s muscles, it shouldn’t be completely abandoned.

In fact, it is suggested that alternating between pavement or harder surfaces and sand running can provide a well-balanced running routine.

As any exercise proves, to gain the best results from it, alternating between different types of workouts is best. For example, those walking for weight loss can’t just walk the same distance or speed forever and get continued results.

There has to be an increase or change to the workout, in general, to continue on the path of losing weight.

These benefits of beach running are truly remarkable. While the workout itself is better, so are the views!

Beach running also provides people with stunning surroundings and makes them feel like a large part of their natural surroundings.

Because beach running requires more energy to move through the sand (almost 1.5 times more than running on harder surfaces!), it ultimately does burn more calories.

are important to burn because they help maintain the body, include muscles, which are a large part of why people run in the first place.

Beach running can help burn a little more calories, however, it is important not to cut back on calories too much as muscles need them to help to increase their mass. The amount of calories burned is heavily dependant on a person’s weight.

Typically, anywhere from 300 to 400 calories can be burned per 30-minutes of running while on a hard surface.

Considering that sand requires more effort to run through, the calorie count can be adjusted to show more calories being burned.

Once again though, it does depend on a person’s weight and even if their overall muscle mass.

Larger muscle mass means more calories can be burned and heavier people can also burn more calories. Combine this with sand running and the number of calories to burn certainly increases!

Running On The Beach To Lose Weight

Because running on the beach burns more calories than traditional running, it can beneficial to run to lose weight, if it is done properly. The biggest factor is not to overdo it.

It can be tempting to run on the sand for an extended period of time in an attempt to lose weight. However, it is important to pace it out as with any exercise.

Overweight people might find running on the beach quite a challenge. The terrain itself is demanding and requires the runner to put a little more effort into the exercise than traditional running.

This is why pacing is important. Starting off slow and gradually increasing the amount of time spent running on the beach will yield the best results.

Over time, running on the beach will become a routine that has been shaped into a better workout. This gradual progression and adaptation of routine will help people lose the most weight.

Is Running On The Beach Bad for You?

Running on harder surfaces like pavement or grass areas is notorious for causing impact-injuries on the knees and ankles. Going on a run in the sand does present a better workout and reduces the risk of injury to these body parts.

While running on the sand reduces the risk of injury to knees and ankles, it does have its own concerns for people.

While knee sprains are a knee-related issue, sprains aren’t as serious as other knee injuries that can occur through traditional running.

Because these muscles and joints are working a little harder on softer surfaces like sand, they can experience tendonitis over a period of time.

While this is an issue, overall, running on the sand isn’t bad for you. It can be a well-balanced exercise!

When people run on the beach, there is always the question of whether or not to run with shoes on or off. Running on the beach without shoes is a great way to enjoy the sand.

However, if you are running for exercise, especially to lose weight, it is important to wear proper shoes. It helps support the feet and protects them from shards of seashells, etc.

Running on the beach is a great way to get some serious exercise if approached properly. It can be great for a light run, weight loss, or part of a serious workout routine.

Between the beauty of the beach and the benefits of the sand, running on the beach truly does offer a lot of an exercise routine!