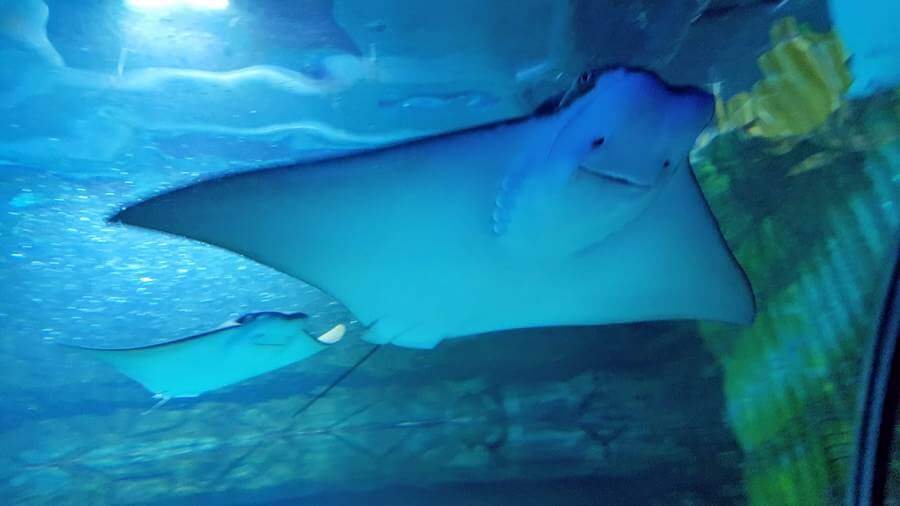 The first day of our Australian vacation. It was a lovely day, so I said to my girlfriend that we should go to the beach and swim. I was shocked by her reply. No way would she set foot in the ocean in Australia; there were just too many dangerous creatures.

It made me think that there must be many people feeling this way, so I decided to produce a simple guide for my girlfriend and anyone else that needed it.

General Safety Tips Before You Enter The Water

Where possible, it’s smart to swim only at beaches that are patrolled. Make sure you read any warning signs at the beach.

If the beach sign says, it’s closed, then DO NOT SWIM! If there is a lifeguard, then follow his/her instructions.

If you do find yourself at a beach that is not patrolled, find some locals to talk to about potential dangers.

These ferocious creatures are responsible for more deaths in Australian waters than sharks. The venom contains toxins that are going to cause a lot of damage.

They will attack your skin, nervous system, and heart. The venom is so potent that victims often die before they even reach the shore. Those that do survive will have a lot of pain for weeks afterwards and you will be scarred.

Talk to the lifeguard or locals before entering the water, avoid the jellyfish season, use a protective cream, wear a wetsuit. Enter the water slowly as this gives the jellyfish time to move away from you. Never run into the beach!.

You can find these dangerous creatures in the ocean. However, you are more likely to come across them in estuaries or rivers. Saltwater Crocodiles are savage and will take advantage of any opportunity to get their prey. They are a particular problem around Darwin.

Watch out for warning signs. Talk to locals.

Blue-ringed Octopus Hide In Holes Of The Reefs

Keep well clear of these creatures. Yes, they look beautiful but they bite and sting. The venom can be fatal, and there is no antidote. Once stung, the body starts to shut down, and breathing becomes harder until it is just impossible to breathe.

Victims can be treated, but it involves trying to keep the patient alive and breathing until the venom naturally disperses.

Talk to the lifeguard or locals before entering the water, avoid the jellyfish season, use a protective cream, wear a wetsuit.

Stonefish Will Blend In The Rocks

Stonefish lurk in shallow waters pretending to be a rock. They are very hidden, and you probably would not spot it. They are more common in rocky areas. The sharp spike is not really what is going to hurt. It is the venom that it injects that is so painful and could be fatal. Most common in northern Australia.

Wear thick-soled shoes and when walking in the shallow water to shuffle your feet and not lift your foot.

Lionfish Hang Out Among The Reefs

The venom of a Lionfish is not going to kill you, as long as you are a healthy adult. It will cause a lot of pain, blistering, and swelling. So it is still best to avoid them.

They are actually not aggressive and will only usually defend, so leave them alone.

Sea Snakes Can Be Found Amongst Seagrass

Sea Snakes are not usually found close to the shore unless they are sick. They are mostly docile and will generally swim away if they see you.

They are venomous, but anti-venom is widely available. As with Stonefish, leave them alone if you see one.

They are not ordinarily aggressive and will only usually defend, so leave them alone.

In Australia, numerous species of Rays can potentially sting. They are generally not aggressive, and most victims of their sting had stood on them when they were walking in shallow waters.

They are rarely fatal (although it was a Stingray that killed TV naturalist Steve Irwin). They usually hide under the sand (hence the problem of standing on them). Other than that, they are unlikely to seek you out and attack.

If walking in the shallows, shuffle your feet to warn the stingray you are coming so they can swim away. If scuba diving, before you stand on the bottom, disturb the sand with your flippers briefly.

Great Barracuda Can Be Found In Large Groups

These fish have powerful jaws and can potentially bite and attack a human. However, it is believed that in most cases where a barracuda has taken a bite, it has been because of poor visibility and mistaken identity.

If they do bite, it can cause severe lacerations to the skin. Attacks are sporadic.

Leave them alone, and do not get too close. Try not to wear anything that glints or sparkles.

Sharks That Can Be Found In The Ocean

I have left sharks until last because they are the biggest fear that tourists have. Movies like Jaws have seen to that.

Forget the media and understand that the beaches in Australia are not all lined with sharks waiting to pounce on unsuspecting bathers.

Statistically, more people die every year from vending machines falling on them than from shark attacks.

Most locals living near the Australian coastline swim regularly and never see a shark. In cases where they do bite, it is not usually a deliberate attack; they just confused you for their usual prey.

World-wide less than five to ten people die from shark bites; we don’t taste good to a shark!

A Great White Shark will typically only attack humans by accident, thinking you are a turtle or sea lion. Just remember, more people die from being hit on the head by a champagne cork or a coconut than fro a shark attack.

The Tiger Shark is narrow second only to the Great White in terms of attacks.

Again, humans are not on the list of most desirable foods for sharks, and it is an unusual set of circumstances that will result in an attack. Follow the steps in the prevention section above, and you should have no problems at all.

As you can see from this article, most problems with other creatures in the sea around Australia can be avoided and are very rare. So enjoy the beach like millions of Australians do every day.

Outdoor markets are found all throughout the world. These markets strive to highlight local tastes and talent through stalls that feature local hand-made products and so much more. Australia has...

Continue Reading
link to Can I Use A Regular Towel At The Beach?

The beach is such a beautiful place to visit. In fact, the beach makes for a great getaway from everyday life. You may find yourself daydreaming about relaxing on the beach watching the ocean waves...