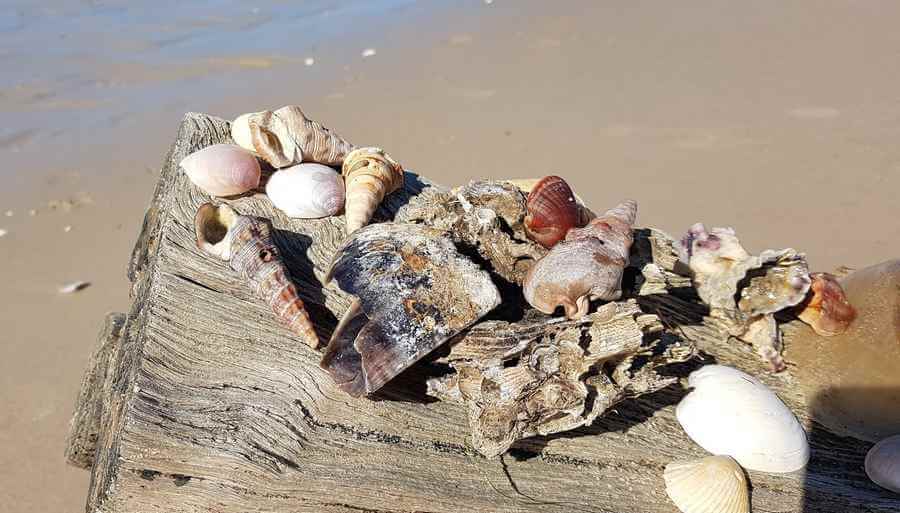 Seashells are one of the most unique things found in nature. They come in many shapes, sizes, and colours making them incredibly different from each other. They are not only fascinating because of how they look, but also because of where they are found.

It is no secret that seashells are found on beach shorelines around the world. In fact, searching for seashells when visiting the beach is a truly wonderful way to enjoy the beach itself.

The seashells are part of the beach’s stark beauty.

Are Seashells On All Beaches?

. These underwater creatures absorb salt from the water and then their bodies excrete calcium carbonate which becomes solid, forming an outer shell.

This formation creates a variety of shapes, sizes, and colours based on the type of mollusk, their diets, etc. Each one is different in the patterns of colour swirls which is why finding shells is such a desired activity.

The most common shapes include conch, cone, fan-shaped just to name a few. This incredible process certainly gives way to some interesting shells, but this leads to how they end up on the beach.

Why Are Shells On The Beach?

Surely it seems a bit morbid to think that seashells come from a dead creature, however, that is simply a part of nature. The reasoning behind why they end up on beaches is directly related to how they get on the beach as well.

Considering that the shells come from underwater creatures, the ocean transports the shed seashells through the water with waves, tides, and currents. The shells can travel great distances this way.

While the distance the shells travel can be significant, the fact of the matter is they eventually get washed up on beach shorelines. The tides bring in the shells it might be carrying and they land on sandy shores.

Shells are largely unoccupied because as stated before, they are shed from a dying or dead mollusk. However, in some parts of the world like Australia, some shells might still have an inhabitant living inside!

This is particularly true of cone snails. Due to this, anyone picking up shells should do it with extreme caution. Ideally, these shells shouldn’t be disturbed, but taking a quick peek into the inner part of the shell will show whether or not something is inside.

The shells that still have creatures inside can also be found on beaches just like the discarded shells. Once again, this is due to the currents bringing these shells and creatures to the land.

The force of the ocean can be quite strong and it has been known to carry all sorts of items in from the waters, even crocodiles!

When Can We Find Shells On The Beach?

Some people might assume that any time of day is a good time for finding shells on the beach. While this isn’t necessarily wrong, there are peak times of day to head out to the beach in search of shells.

The best time of day to go shell hunting is during low tide, preferably in the morning. Low tides can occur during other times of the day, however, low tide is generally in the morning hours in most areas.

Low tide means the water has receded back into the ocean, leaving behind whatever it has carried onto the beach. High tides do carry things to the shorelines as well, however, the beach shoreline is less exposed in these areas.

Shells can be found within the sand flats of beaches and during low tide, these flats are usually accessible. Simply put, more of the beach shoreline is exposed during low tide.

Another time that more shells might find their way onto beaches is during particularly strong storms. This isn’t to say that people should head out to the beaches when there’s a cyclone stirring about.

Rather, after the cyclone or thunderstorms have passed, the beaches might have more shells on them than usual. The winds and storms themselves are capable of creating stronger currents from the ocean that can result in more shells finding their way to shorelines and sand flat areas.

Why Are There No Seashells On Some Beaches?

It is commonly thought that seashells can be found on any beach, almost everywhere in the world. However, the sad truth is that they aren’t always found on some beaches. But why? The absence of seashells on some beach shorelines can be attributed to a couple of reasons.

The first reason is due to the overharvesting of seashells by the human race. The second cause is due to rising CO2 levels in the ocean. Both of these issues are a huge problem behind the lack of seashells on some beaches.

Overharvesting seashells has always been a problem. The manner in which seashells wash onto beaches doesn’t change, but the removal of these shells has certainly increased over the years.

Certain areas of the world have extremely strict rules against harvesting seashells. These include places like Australia and Florida, a state in the United States. In Australia particularly some of the beach areas are considered protected areas of natural parks.

The preservation of the land and its wildlife, including the shells on the beach, is heavily enforced.

There is such strong enforcement in places like Australia because the shells aren’t always empty. Shells like cone snails, conchs, etc can still contain their inhabitants.

In an effort to protect those sea creatures, limits on how many shells can be taken from certain beaches are put into place. Generally, the guests aren’t allowed to exceed a certain weight of shells.

This not only helps to preserve the creatures and their shells but also ensures that overharvesting doesn’t become a problem.

Overharvesting can have negative effects on the environment as well. This includes interfering with the beach’s natural process of erosion protection. Shells can play an important part in building up sand flats and shorelines.

Typically this is from fragments of shells that have broken during their journey through the ocean waters. However, it can be comprised of whole shells as well. It is important for beach shorelines to maintain a sturdy structure to ward off erosion.

The second concern behind there being no shells on some beaches is the rise of CO2 levels. Global climate change is no secret and almost everyone has heard about it in some way.

Some people believe in its existence while others tend to shrug it off. The fact is, there is certainly something changing in parts of the ocean that has an effect on its inhabitants. A good example includes the Great Barrier Reef where sections of it have been subjected to bleaching due to rising sea temperatures.

CO2 levels in the ocean are nothing new, however, their overall increase is alarming. Studies have shown that rising CO2 levels have resulted in more acidic water which decreases the carbonate levels as well.

Since carbonate is needed for mollusks to properly form their outer shells, this is extremely concerning for them. This has resulted in fewer shells being formed in some parts of the world.

No matter what someone’s stand on global climate change might be, the fact of the matter is that change is occurring. That change can be seen in these instances of the coral reef systems and mollusk shells forming.

The rising CO2 levels can be correlated to increased carbon dioxide levels in the environment. This creates a change reaction in the ocean as the CO2 settles into the ocean from the atmosphere. This also changes the ocean’s overall pH balance, which is related to the decrease in carbonate levels.

Seashells will always be a source of great interest for beachgoers. Knowing how they end up on the beach and why some beaches do not have them at all also helps people respect them a little bit more.

Because of the shell’s overall beauty and interesting designs, it is tempting to want them as a keepsake. Many will want to find a shell to hear the ocean in this is ok if you return it. Perhaps snapping a photo is a better alternative.

Sure, it isn’t the same as holding the physical shell, but it can serve as a lifetime memory just the same. This practice can help ensure seashells stay a part of the ecosystems that make up a beach area.

If having a physical shell is an absolute must, then respecting and abiding by any laws concerning their collection should be followed. Either way, those visiting the beach can have a memory from the trip regardless!