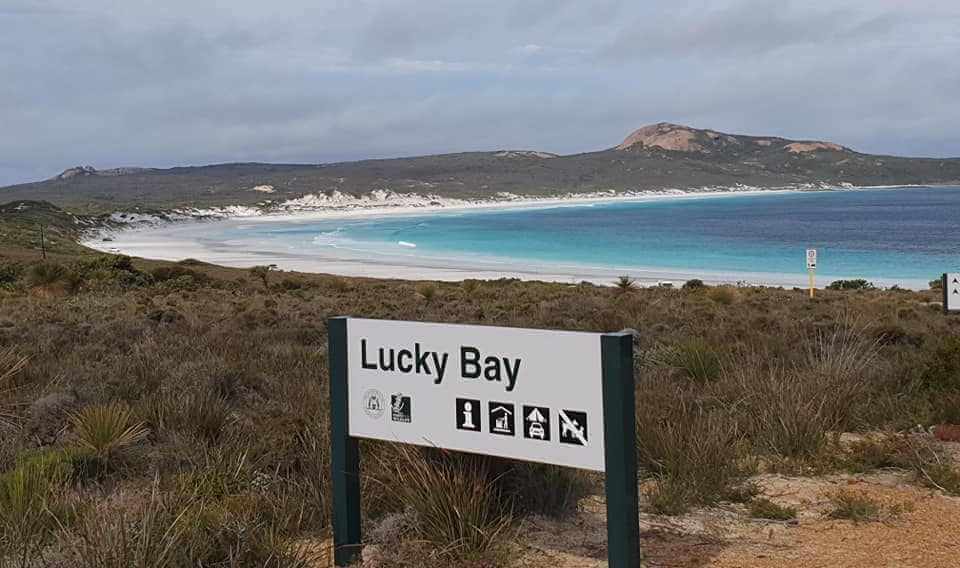 Australia is known for its pure white-sand beaches and turquoise coloured water. This is what has continued to attract visitors and contributes to the amount of tourism.

This has been an ongoing debate, with different areas self-proclaiming the title.

Lucky Bay in Cape Le Grand National Park, Western Australia has the whitest sand in Australia and was proven twice scientifically. This was done by gathering sample sand from beaches all over Australia. The purity of the environment and weather eroded quartz is why Lucky Bay has pristine white sand.

Where Is Lucky Bay Located?

Lucky Bay is a secluded beach on the south coast of Western Australia. This is a 45-minute drive east of Esperance. Lucky Bay is a 5 km stretch of pristine white yet firm sand.

For tours of Esperance click here for current pricing and to book today.

How Did Lucky Bay Get Its Name?

In the early 1800s, Matthew Flinders

, an English navigator was sailing through dangerous waters. He needed to find shelter during a summer storm and ran into this island, subsequently naming it Lucky Bay.

Where Does White Sand Come From?

According to soil research scientists, the white sand found on many beaches is comprised of fine grains of milky frosted quartz and a clean environment.

Sand is composed of organic remains and coral and shell fragments, which over time turns into the powdery sand found on beaches.

The colour is from the calcium carbonate that is found in organic remains of the environment. Quartz, which is what contributes to the white colour of the sand, resists erosion from water, unlike other softer minerals.

Another factor that denotes the colour of the sand is the distance from a river the environment is. Rivers contain coloured contaminants that wash ashore to the coast and colour the sand stripping it of its purity.

Is Having The Whitest Sand Important?

It is said that the whiter the sand the purer the environment since the colour is based on contaminants in the environment. Most brown or tan beach sand is derived from the tint given to the sand by iron oxide, which can be dangerous if large amounts are breathed in.

Simply put, the whiter the sand the cleaner the beach.

How Did Lucky Bay Get The Title Of The Whitest Sand?

Lucky Bay received the crown for this title back in 2017, after testing the sand from 7 other beaches around Australia. The test was performed using samples obtained from the most active area of a marine environment, within 10 cm.

After a visual test and a test of the sand, Lucky Bay unanimously was crowned as having the whitest sand in Australia.

Rumours Of The Whitest Sand In Australia Debunked

It started as little banter amongst colleagues, however, curiosity became peaked and a challenge was formed. The criteria were established and the search began, putting Lucky Bay at the top of the list.

This is what contributed to debunking the rumours of Hyams Beach holding the title.

Other Beaches With The Whitest Sand In Australia

Although Lucky Bay has the claim to fame as having the whitest sand in Australia, there are many beautiful beaches with a pristine environment comparable to Lucky Bay.

Other beaches with the whitest sand in Australia including Lucky Bay:

This information is based on research performed by the National Committee on Soil and Terrain in Australia. This was a decade long research process performing multiple tests, and overcoming disputes and objections from various locations. This challenge became the first official white sand test

There are many disputes over what constitutes a beach according to beachgoers, academics, and science. If the search for the whitest sand allowed lakes and rivers, the results may have been different.

However, according to the National Committee on Soil and Terrain, this test was based on a marine environment, which excluded lakes and rivers, as they are not beaches perse.

Other criteria consisted of not altering or treating the samples in ways other than air-drying, no bleaching, and impurities were not to be removed from samples. The tests were to consist of sand in its most natural form to give the most accurate results.

Does A Beach With White Sand Mean Its Cleaner?

In conclusion, the cleaner the environment, the whiter the sand and the cleaner the beach. Many beaches all over Australia will boast as having the whitest sand, and many do have pristine white sand.

This was another contributing factor in search of the whitest beach and prompted the challenge.

The constant debate over which beach had the whitest sand needed to be put to rest. A simple banter turned into a scientific study, performed by the National Committee on Soil and Terrain.

In the end, the majority of the beaches in Australia have the most immaculate whitest sand, after all this is what attracts people to visit or take a holiday. With that in mind, while there are many beaches in Australia, this information is based on the samples that were collected at the time of the research.

Most people that go to Lucky Bay, say they got to see a couple of kangaroos on the beach per visit when heading to the beach area. It’s a shame that all cars are allowed on the beach.

Some of these cars are leaving oil stains and others were driving a bit too fast, although small children were playing nearby on the beaches always remember to follow the beach safety rules.

They could use some more picnic tables and also some signs not to feed the wild animals. Everyone was feeding them and I felt bad for the kangaroos.

Some people have reported that they have gone here twice and both times they cuddled with the local kangaroos that seem to always be there. You will have to pay a fee of around $13.00 just to enter the national park, This money goes into protecting and maintaining the national park.

You will find that the kangaroos are just happily basking in the sun on the beach among all the tourists. The local kangaroos are quite used to having humans around and don’t act as neophobic as in other parts of WA.

The Bay is backed dropped by lots of dunes and the sand is very fine so its a gorgeous day out there to be had by all. The sea is the colour of cobalt and sand so white, if you are lucky to go when there are not many people around you will be lost in the peace and quiet.

Waking up of the morning time you will see a lot of kangaroos at the campground just feeding on the grounds. Solar showers, flushing toilets, a nice size open kitchen with bbq facilities and nice staff on hand.

What more could you want to see? With friendly kangaroos playing and resting on the beach and some of the visitors have been lucky enough to see dolphins swimming and playing in the waves!.

There’s also a coffee caravan on the beach too. Now that’s something you can’t do anywhere else!, have a coffee and sit with a kangaroo, How Australian is that!

For tours of Esperance click here for current pricing and to book today.

link to What Is It Like To Live Near The Beach?

Continue Reading
link to How Many Black Sand Beaches Are There?

Beaches are one of the most iconic ways to enjoy the ocean. Typically, beaches have soft golden sands and are absolutely stunning to see. While golden beaches are certainly beautiful, they aren't the...