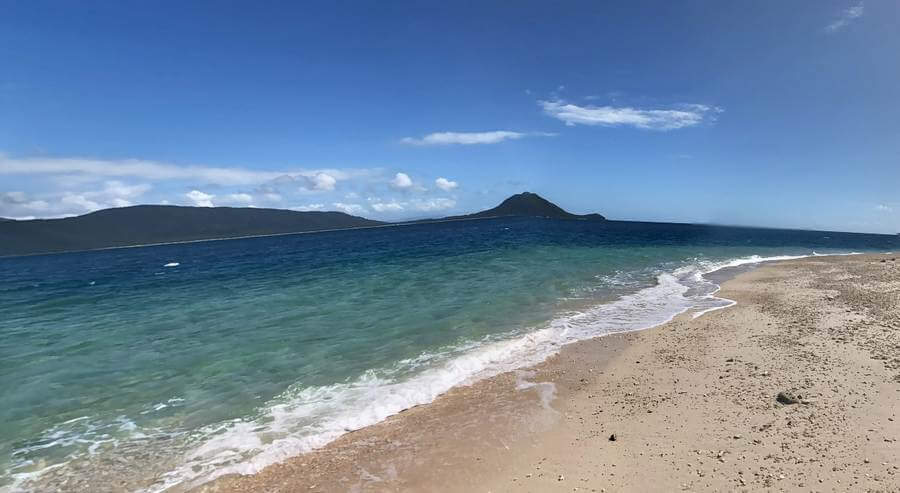 Australia has over 10,000 beachy areas that include beaches off of various islands off its eastern and north-eastern coastline. With so many beaches available, it is important to know which of the more notable ones are safe to swim in…or if they’re not.

When it comes to Fitzroy Island, specifically located in the Cairns Region

, approximately 29km southeast of Cairns, swimming is possible! This beautiful island is accessible by ferry ride from the mainland and is about a 45-minute trip.

Swimming off the beaches of the island is possible. The waters here are considered calm, much like the waters in other parts of the eastern coastline of Australia.

In fact, the island also has various reef systems that are great for those wanting to go snorkelling. The reefs here are considered part of the Great Barrier Reef and the island prides itself on being part of restoring the corals to the reef system.

They are such a delight to see while swimming and snorkelling on the island.

With that considered marine life in the waters, guests can see clownfish, turtles, and even reef sharks. Reef sharks aren’t always present, however, they only pose a threat when provoked and generally only linger among the reefs.

Considering that Australia has so many beaches, not all of them are patrolled. Beaches that aren’t patrolled shouldn’t generally swim unless there’s more than one person so that there are always an extra set of eyes to keep alert for any dangers.

When it comes to swimming at Fitzroy Island, there are two beach areas most known for swimming or snorkelling activities. These are specifically Main Beach and Nudey Beach

Main Beach is patrolled and is the most popular of the two spots. One reason for this is its uniqueness. What makes this beach so special is that its shoreline isn’t made up of sand.

Instead, it is a coral beach where dead corals have washed up on the shoreline. There are millions of corals that make up this beach area and it is an exploration in itself while treading out for a swim in the comfortable waters!

Nudey Beach is an exclusive area where special white corals can be seen while snorkelling the waters. Moreover, this beach area has a sandy shore rather than the coral shoreline of Main Beach.

It is certainly softer on the feet and really encompasses the beauty of the island. This beach has other beautiful corals and marine life speckling its shoreline, only a few metres from shore.

Access to Nudey Beach is quite remarkable as it’s through a specific walking track. This walking track winds through portions of the lush rainforest and gives guests stunning views of the forest as well as various wildlife.

The walk is only about 15-minutes, making it accessible to almost everyone.

Aside from these two specific areas on the island, swimming is not encouraged in any other foreshore or shoreline areas. This is because the waters are not calm off of the other shorelines and can have some turbulent waters.

Can You Swim At Fitzroy Island In December?

Swimming at Fitzroy Island is typically a year-round thing. For December specifically, the weather is hot and the temperatures usually range around 31 degrees Celcius for high temperatures.

These warmer temperatures are known to attract stingers, although they are not very common off the shorelines of Fitzroy Island.

Even though they aren’t commonly found here, swimming on the island during December should be done with a full-body suit to protect people from potential stingers.

In other parts of the Cairns Region, the stinger season starts in November and is known to extend into December.

Even with the slight possibility of stingers, swimming during December can be an enjoyable month to visit the island. Swimming and snorkelling can still be enjoyed as well.

Northern Queensland and the Cairns Region do not have traditional “seasons” like winter, fall, spring, or summer. Instead, they have a wet or dry season.

When Is The Wet Season At Fitzroy Island

The wet season is November to March while the dry season is April to November.

December falls in the wet season in this region and this specifically means it is pretty high on the temperature scale (with 31 degrees Celcius being the average) but also that they have an abundance of rainfall as well.

On average, the Fitzroy Island area and Cairns Region are said to have rainfall averages of 180mm in December alone.

This even includes its coolest month, August. In August, the average high temperature is said to be 27 degrees Celcius. While it is a little cooler, it is still pretty warm for swimming and snorkelling.

No matter the time of year, swimming is a lot of fun off the Main Beach area and Nudey Beach.

Both spots are truly beautiful, especially Nudey Beach. As expressed before, access to Nudey Beach is through a specific walking track, one of the few on the island.

Not only can guests soak in the beauty of the island from the beaches themselves, but this particular walk also emerges visitors into the sheer beauty of this island!

Australia is one of the most exotic places to visit in the world. There are idyllic beaches, tropical islands, rainforests, and wildlife sightings, just to name a few of the iconic things this country has to offer!

Aside from its sheer beauty and abundance of things to explore, it is also known for its wild dangers that can include turbulent waters and dangerous wildlife.

The dangerous wildlife can sometimes even be marine-based such as stingers. Some people might wonder if it’s safe to swim in certain places due to these dangers.

One place, in particular, includes Fitzroy Island in the Cairns region of Australia.

link to Are Islands Floating?

Islands are one of many natural phenomenons that exist on earth. Islands are found all over the world and vary in size and shape. Some are more remote than others while some islands are right off...

Queensland, Australia is home to a variety of idyllic places to visit. From pristine beaches to rainforests and everything in between, it is brimming with adventure. This is particularly true for...