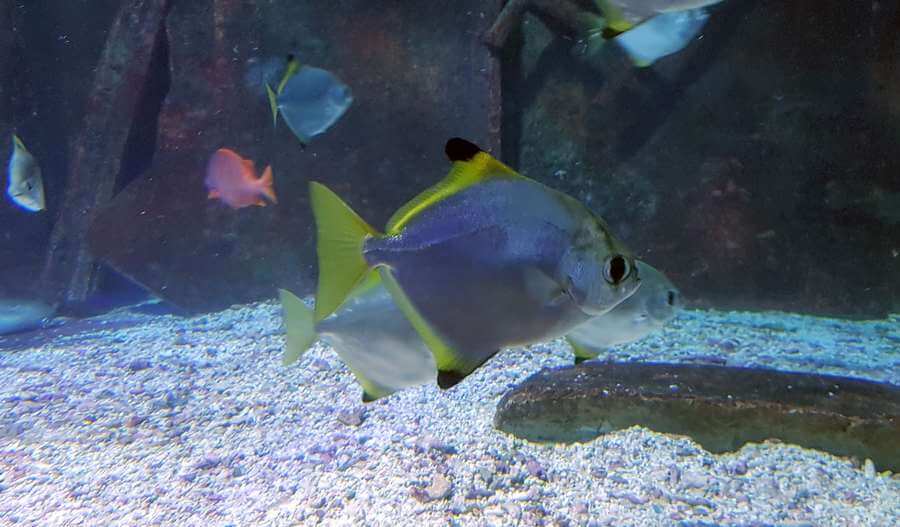 The Great Barrier Reef is possibly the most iconic place on Earth. This huge reef and it’s location is spread out among the north-eastern and eastern coast of Queensland

, Australia and it encompasses somewhere around 2,300 kilometres of the coastline.

It also is said to be somewhere around 347,000 kilometres of square footage. This vast coral reef system is a highly popular reef section and attracts visitors from all over the world. However, it also attracts various marine life and sea creatures as well.

Considering its incredible size, the Great Barrier Reef is home to various animals. In general, fish, reef sharks, sea turtles, dolphins, and even some whales can be seen among the reef. This is just a taste of the variations of marine life lingering among the reef.

Whether these animals call the reef home or are just passing through the reef is populated with a significant amount of marine life.

The reef itself is a living organism, making it even more iconic. More specifically, the marine life that dart between the corals is quite the sight to see while snorkelling, scuba diving, or even taking a glass-bottom boat tour!

Between the marine life and the vivid colours from the sections of the reef, it has a lot to offer up guests.

The Great Barrier Reef is fascinating in a lot of ways, however, the marine life here is one of the main attractions to see the reef. Not only can guests enjoy the reef itself but they can be exposed to all the wondrous sea creatures among its ecosystem as well.

This ecosystem is super special as it is a natural wonder of the world. Its enormous size makes it even visible from space! However, to see all the wonderful sea creatures, coming down to Earth is absolutely necessary!

Any experience of the reef, by snorkelling, diving, or glass-bottom boat

is truly a remarkable experience! It really sheds light on the various marine life that frequent the reef area.

Reef sharks are not always lingering around the Great Barrier Reef, however, they are known to show up! After all, they are “reef” sharks! When people hear the word “shark

“, some fear comes right along with it.

While other species of sharks are considered to be an issue, reef sharks are typically pretty harmless. This doesn’t mean someone should let their guard down.

With Australia’s vast wildlife, on land and in the sea, it is always important to take any shark seriously. Reef sharks should be admired from afar. They do offer their own beauty.

However, what are the various Great Barrier Reef sharks? The most common ones seen among the reef are white tip and blacktip reef sharks.

While those are the most common, there are other variations to catch a sighting of! Below are the other species of reef sharks that may show up among the Great Barrier Reef!

These are the most common species found around the Great Barrier Reef. While they aren’t always swimming around the reef, they can be spotted. If someone is lucky enough to spot one, it is absolutely amazing!

Once again, they rarely pose a threat to divers or snorkellers. Unless provoked, they will swim by and do their own thing! While these are known species to be found around the Great Barrier Reef, there are other, more dangerous sharks, that can enter the reef areas.

Below are some of the rarer species of shark to see in the reef areas!

These are far less common visitors to the Great Barrier Reef, however, anything is possible. It is important to keep a watchful eye out for sharks when being in any type of ocean water.

This is especially true for Australia as some of the marine life can be dangerous. Being aware of the surroundings is the first step to any water or beach activity in Australia. Hopefully, no one encounters the above sharks in the Great Barrier Reef.

However, seeing some of the actual reef shark species is quite a memorable treat. They are extraordinary creatures for sure!

What Are Some Of The Great Barrier Reef Fish

They are incredibly unique, often brightly coloured, and come in so many sizes and shapes. With over 1500 fish species that have been identified as living among or frequenting the reef, there are plenty to witness on a dive, snorkel, or glass-bottom boat tour!

These are the most common species that frequent and live among the Great Barrier Reef, however, other species may appear as well. These gorgeous fish are so beautiful to see while on a trip to the reef.

While those beauts do provide quite a sight to be seen, are there any dangerous fish among the reef? The answer is yes. This news shouldn’t act as a means to scare away any visitors.

Rather, as with any wildlife in Australia, caution should always be practised. Always be aware of the surroundings and seek medical attention as soon as possible if any direct encounters occur.

Below are some of the dangerous fish species that can be found in the Great Barrier Reef!

Box Jellyfish Identified by its long tentacles and globe tops

These usually are on the northern end of the reef where the water is much warmer. However, they do not have a permanent residence here.

Sea Snakes Are Found At The Great Barrier Reef

Sea snakes can be found in the Great Barrier Reef and can be lethal. Identified by their striped patterns, they are easy to spot. They are not usually dangerous to humans unless provoked in some manner. Although not a fish, they are important to bring up!

Stonefish Identified by its stone-like features

This fish is considered to be the most dangerous in the world. It is the most venomous fish with neurotoxins in its spiny dorsal fin. Because of it looking like a stone, it camouflages itself among the reef areas along the seafloor.

Due to this, it is not recommended to walk on the seafloor near the coral reef. This ensures safety is being taken in concerns to this fish!

These snails are popular for their intricately designed shells. While they are beautiful, they are dangerous and should never be picked up from a seafloor. It is estimated over a 100 species of cone snails live among the Great Barrier Reef. While they are not fish, they are still worth mentioning.

These species may be dangerous, but once again, always take precaution in the waters. Even with these dangerous fish species (and snakes and snails!), the animals in the Great Barrier Reef are quite remarkable to see!

From sharks to various tropical fish, there is something around every corner. It is also good to note that other animals in the Great Barrier Reef can include dolphins and sea turtles just to name a few.

Australia always amazes its visitors and the Great Barrier Reef, in Queensland is an incredible way to experience this beautiful country!