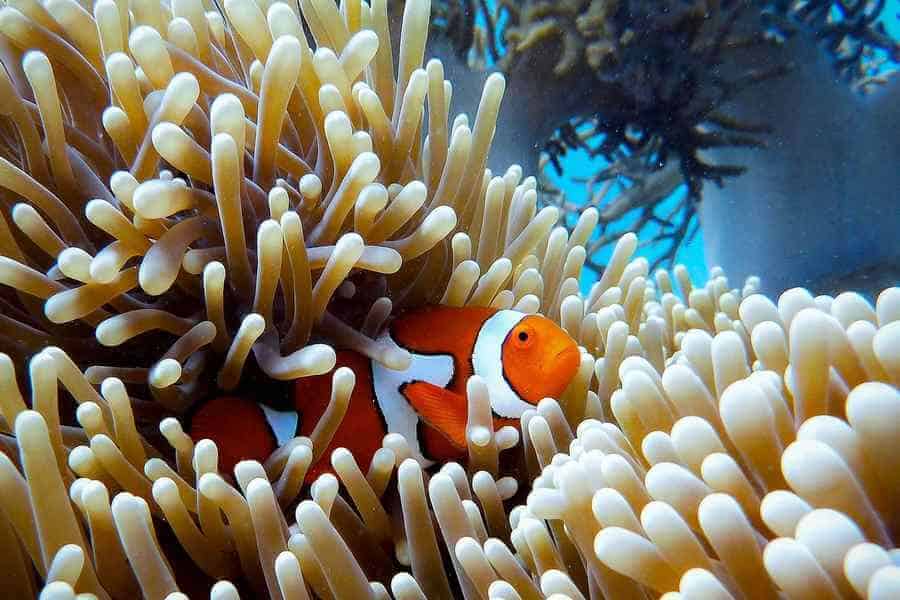 Practically everyone around the world knows about the Great Barrier Reef. It is one of the most astounding naturalistic wonders of the world just off the north-eastern and eastern coast of Australia in Queensland.

It is the world’s largest coral reef system, even able to be seen from outer space! This out-of-this-world reef is truly remarkable spanning around 347 square kilometres and around 2,300 kilometres along the eastern coast and various islands.

With such incredible size, it is easy to see why it is so impressive to people. Queensland may be best known for tourists and residents flocking to its coastline and islands to catch a glimpse of this beautiful reef.

Besides its massive size, the Great Barrier Reef is known for its coral.

After all, the Great Barrier Reef is made up of coral reef systems. This underwater amazement of nature is also home to over 1,500 species of tropical fish and other sea creatures like reef sharks and sea turtles.

Because these creatures call the Great Barrier Reef coral home, the reef has become more than just a coral reef system. It has become a delicate and intricate ecosystem.

Everything thrives together within the reef and since late 1700 when it was first discovered, there has been a lot to learn from this ecosystem.

With such an interesting ecosystem, the Great Barrier Reef is a continuous way to learn about this wonderful reef system. One of the most fascinating things about the reef is the coral itself.

The reef’s coral is truly a naturalistic beauty. The vibrant colourings are mixed among the greens of underwater plant life and marine life as well. This mixture makes for quite a piece of underwater art.

But what is so special about the reef coral itself? What exactly is coral? These curious questions are easier to answer than one may think!

The Great Barrier Reef is said to be at least 500,000 years old or more. Over the thousands of years, the reef aged pretty well. When it comes to how the reef was formed, it is first important to understand what coral is exactly and its overall process.

. These living organisms are stony corals and provide the building blocks in which reef formations gain their shape. Moreover, these polyps secrete a skeleton of calcium carbonate. This is the very beginning of something truly remarkable.

When these are formed, millions of coral polyps are a part of the process. The process is never quite “done” as older colonies’ foundations can be taken over by new polyps.

These formations can weigh astronomical weights and the Great Barrier Reef’s weight can’t exactly be measured. But considering its enormous size, it’s easy to realize it may weigh quite a bit.

The growth rate of the coral reef is heavily dependent upon the water conditions in which it resides. If there are optimal water temperatures, clean waters, and sunlight the corals can grow almost 5 centimetres a year.

That doesn’t seem like a whole lot, but compared to other growth rates, it can be accomplished. Slower growing rates are somewhere around 2 centimetres a year. That’s a bit of a difference when there is a lack of optimal conditions.

It is said that the Great Barrier Reef coral may have started at the base of continental mountains. When sea levels began rising, the coral ascended these mountainsides and ultimately ended up fully submerged.

This event caused the smaller islands of submerged areas we know today. Then the process of building up the reef, even more, began to expand outwards.

When addressing how the corals form, what are the best conditions for the Great Barrier Reef coral to thrive? Ecosystems definitely have their checks and balances, but the coral itself needs conditions to maintain its status.

Below are the best conditions for coral!

These conditions help the Great Barrier Reef continue to thrive. Sometimes these conditions can be a challenge to meet, especially with human intervention.

However, humans can do their part in preserving the waters around the Great Barrier Reef corals. This means less pollution, and less overfishing just to name a few.

How Much Coral is in the Great Barrier Reef?

While there are millions of coral polyps that help in the formation of the coral systems, it is estimated that there are around 2,900 to 3,000 coral reef systems in the Great Barrier Reef as well as 300 coral cats.

Coral cays are small islands formed from sediments from reefs and what they sit on that get swept up by refracted waves.

These coral systems have a mixture of different types of coral reefs. This adds to the richness of this delicate ecosystem. There are quite a few corals associated with these systems.

Below are the most common types of coral found on the Great Barrier Reef.

Considering there are close to 3,000 coral systems that make up the Great Barrier Reef, these are just the major groupings of corals within those systems.

The coral systems come in various shapes and sizes, making this unique ecosystem even more thrilling to experience.

The Great Barrier Reef may have aged well, however, in more recent years it has undergone some harsh conditions. This includes overfishing that has caused invasive species like the crown-of-thorn starfish

that eat away at the reef.

Pollutants have caused unclear waters and smothering of corals. However, coral bleaching

is perhaps the most dangerous of things to occur on the Great Barrier Reef.

Coral bleaching is the result of global warming and rising sea temperatures. While there’s some ugly debate about whether or not global warming is a thing, the Great Barrier Reef is a direct result of this phenomenon.

When the temperature of the water that the coral reefs sit within is not an optimal temperature (that 21-29 degrees Celcius), it will result in coral bleaching.

Coral bleaching is when the coral expels that important algae living within its core and becomes completely white, grey and brittle.

Just because it has turned white or grey doesn’t necessarily mean it’s died. However, this condition does endanger them to be more vulnerable to death.

That may seem like a drop in the bucket compared to its large size, however, over time, this really adds up to the overall condition of the reef.

While humans cannot do much about the global warming issue, they can control what they can control. This includes runoff into the ocean that pollutes the waters including pollution itself.

Ensuring that the coral reefs receive as much sunlight as possible and clear waters is a first step in the efforts to save what’s left of the Great Barrier Reef.

How Much Coral Has Died in the Great Barrier Reef?

Between the bleaching and other things that threaten this precious reef system, there are portions of the Great Barrier Reef that have died. The truth may be hard to swallow, however, knowing the statistics helps people realize the seriousness of the barrier’s fate.

In 2016, just 4 years ago, it was reported that somewhere around 30% of the Great Barrier Reef had died

just that year alone from bleaching. For something so large, this means miles upon miles of drained corals in underwater graves.

The sunlight helps provide food for these fragile systems, however, when the temperatures of the water rise too much, it is simply too much pressure on these corals.

While climate change is mostly out of our control, we tend to rely on governments to come up with plans to reduce climate change. This may not always be feasible.

For example, rising temperatures aren’t necessarily something that can be controlled. As stated before, we can make efforts to help reduce the other forms of things that endanger the reef, like overfishing and pollution.

In terms of just how much of the Great Barrier Reef is dead, estimates show half of it is depleted. Half is quite a bit when it comes down to this massive coral system.

With such varying changes in the climate and sea temperatures, the exact time that the barrier may have left is not exact. However, experts have estimated it may last until 2050.

That doesn’t seem too close but it’s only 30 years away. If the rate of bleaching

continually increases, 2050 will be here before we know it.

While it is obviously sad about the portions of the reef that have died and how much time may be left, the Great Barrier Reef has so much to offer.

There are still plenty of sections in Queensland with vibrant colourings that attract many visitors every year. It will continuously be a source of happiness and beauty while it lasts.