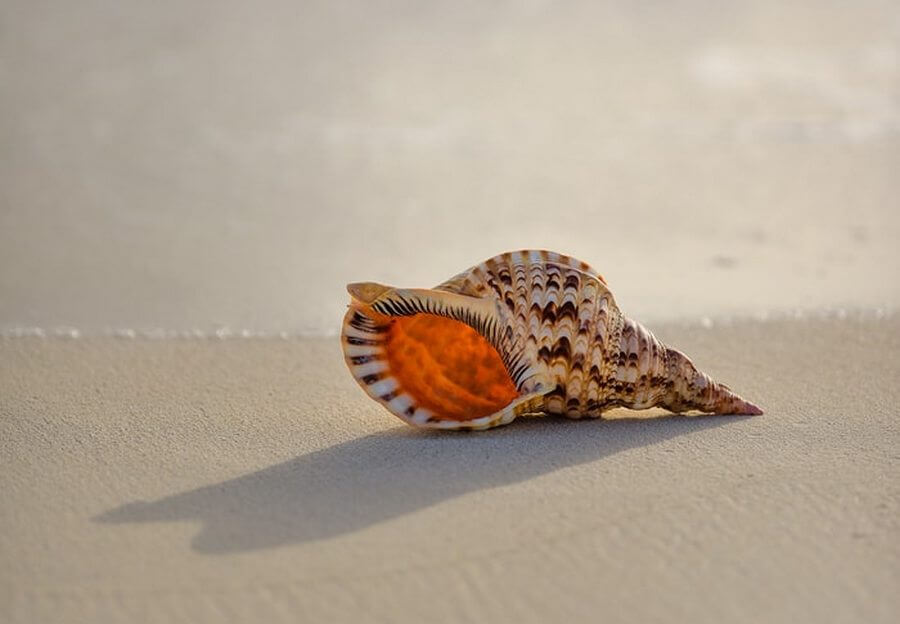 While the creation of the seashell is interesting, the sizes and shapes are what truly attract people to them. Each species of mollusks that create them have their own special shape etc.

. The conch is known for its large size (they can range anywhere between 15cm to 30cm or 6in to 12in) and spiralled cone shape.

The top of the shell is generally spiralled and pointed, proceeding to get narrower towards the bottom of the shell. The colourings vary and are created by the sea snails excrement that gets expelled into the exoskeleton during creation.

The look to these shells are quite intriguing, however, this isn’t what makes them notorious. It’s their sound.

When the shell is placed up to someone’s ear, it has been a long belief that the ocean can be heard. While this is not true, its often referred to as seashell resonance or ambient noise and not the ocean. The same resonance can be heard by using your hand clasped over your ear without a seashell.

It is possible to hear this phenomenon in other cone-shaped shells, however, the conch shell has been determined as the best source for the sound.

Perhaps it is the large size that best projects this particular sound. Over many years, there’s been great debate on what exactly people are hearing from inside of this magnificent seashells.

Why Does It Sound Like The Ocean In A Seashell?

This ocean being heard in a seashell might possibly be one of the oldest tales of legends. There’s no exact time frame that can be put on this belief, however, plenty of research and thought has gone into this subject matter.

Anyone that has been to the beach has probably held a conch shell up to their ear in excitement to “hear” the ocean inside. When placing the shell to your ear, there is a stark sound of waves that seem to emit from the inner parts of the shell.

Sure, it seems like magic, however, there’s a bit more to it than that. Referring back to the fact that similar noises can be heard in smaller shells but can be heard better from a conch shell is a great starting part to peeling back the mystery.

Throughout the various research

that’s been done on this matter, it has been thought that our ears have been playing tricks on us.

This is to say that for a while, researchers thought that our blood vessels were the cause behind the sound. However, it has been discovered that rushing blood vessels are not the cause.

The true reasoning behind hearing the ocean inside of a seashell reverts back to its shape. The conch shell in particular, with its large and curved contours, is the real magic behind the sound.

When the air around the beach and ocean enter this large cavity, it bounces around the inside of the shell, thus emitting the sound we know as the “ocean“.

A great way to really envision this is to think of a room with a door slightly ajar that suddenly has a ball bouncing off of the walls. The ball doesn’t necessarily have anywhere to go and the contact with the walls creates a sound that is escaped through the crack in the door.

This example, as well as the actual air entering a seashell, can be referred to as “resonance“. It isn’t necessarily an echo, though some might think that it is.

Resonance is more of a deeper sound, that is projected rather than simply heard as it fades away. While is it is the air that is circulated from the ocean, it isn’t exactly the ocean we’re hearing.

It gains this illusion due to how it hits the walls of the inner shell while we’re still near the shorelines.

Can You Really Hear The Sea In A Seashell?

As expressed in the above topic, the sound that is being emitted isn’t really the sea. This illusion is simply created due to how the sound hits the inner walls of the seashell, combined with us still being near the shorelines of the ocean.

The reason that the conch shell provides such an impressive sound emission is because of its size. The walls are larger, the opening is larger, thus creating a bigger and deeper sound that resonates off its inner walls.

While the conch shell has forever been known as giving sounds of the ocean, other similarly shaped shells will also provide sound as well. Once again, this is due to the shape of the shell.

Any shell that has a cavity in a cone shape, with an opening similar to that of a conch shell, can produce this sound. It is important to note that these sounds will not be as deep as those that come from their larger counterparts.

The frequencies of the sound will vary due to the smaller sizes, including smaller interiors for the sound to bounce off of.

This concept of different frequencies make listening to the sounds of air moving inside the shells even more exciting. It makes each and every experience more unique than the last.

This is just another fascinating way that seashells are special in their own way, including how they are formed by the various creatures and colour combinations that can occur.

The process in how shells are made also dictates the shape they take on, which also adds to the overall uniqueness of listening to the “ocean” in a seashell.

Seashells are one of the most interesting things in nature. All over the world, they are found along sandy shorelines.

What makes them so interesting is their various shapes, sizes, and colours. A stroll along the beach or snorkelling will often give way to sights of beautiful shells.

People often take granted finding them along beach seashores without realising just how these unique shells are formed.

Seashells are formed by the secretions of mollusks (think like snails, oysters, Limpets etc.) that hardened into exoskeletons to protect the creature.

When these shells are shed, they tend to wash up on beaches around the world.