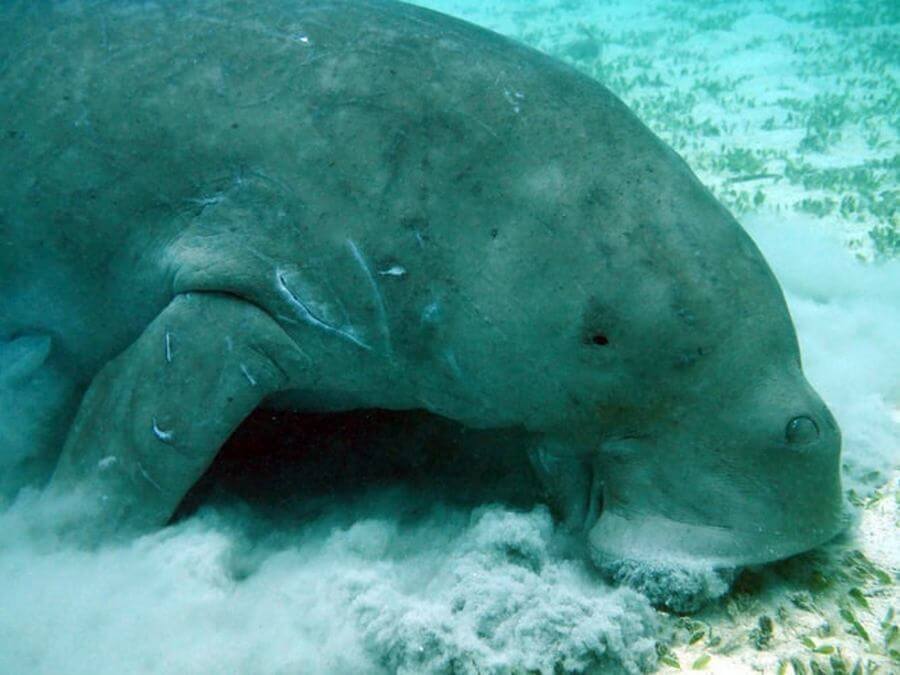 Dugongs are one of many intriguing marine animals. These creatures closely resemble manatees and are actually part of the Sirenia species. These docile marine animals aren’t the most attractive, however, their calming nature and general size are what make them so interesting to people.

They can reach upwards of 300cm in length and weigh an incredible 420kg!

These large, yet laid-back creatures can be found in various parts of the eastern world, however, they are notoriously known for being in the waters around Australia. Australia is no stranger to unique wildlife. In fact, because of its diverse wildlife, there are some opportunities to swim or experience certain animals up close!

All throughout Australia, there are unique types of animals that humans can experience up close. There are whales that can be seen up close on boat tours. There are even opportunities to swim with dolphins. But what about dugongs?

However, they are found in other waters around Australia including near the Queensland/New South Wales border. These areas have shallow waters where seagrass is most commonly found which is their primary source of food.

Even though they are found in certain areas of Australia, they are endangered. Encountering a dugong in the wild isn’t a common occurrence, in fact, it’s quite rare. With this in mind, the best place to see dugongs in the wild is in Ningaloo Reef (Western Australia).

This is considered the best place to swim with dugongs in Australia!

Can You Swim With Dugongs?

The dugong encounters here are absolutely remarkable since it is known for having the largest population of them in the country and throughout the world.

In fact, there are estimated to be about 10,000 dugongs in the Shark Bay area which accounts for 10% of the whole world’s population of dugongs. It is estimated that Australian waters could have as many as 80,000 dugongs, however, it is important to note that this stretches throughout the Indian Ocean and the Pacific Ocean.

The number seems high but these elusive and shy creatures venture into the waters of the Indian and Pacific Oceans as well. They might be swimming about in the waters, but due to their nature and endangered status, sightings of them are considered to be a lucky occurrence.

Considering their rarity, spotting them at Shark Bay and having the opportunity to swim with them is truly a once-in-a-lifetime experience. Dugong encounters at Shark Bay are usually conducted by various touring groups. These groups typically provide scenic flights over the bay area and various boating tours.

However, diving is permitted in Ningaloo Reef where dugongs can sometimes be spotted. If someone is lucky enough, they can swim in the same water and reef system as dugongs!

Where Can I See Dugongs In Australia?

Shark Bay is the most exclusive place in Australia to see dugongs, however, it isn’t the only place to spot one. Some lucky people have spotted dugongs off other coasts of the country. Seeing one of these creatures in the wild is truly like finding a treasure!

Below are the places where dugongs can be seen in Australia (other than Shark Bay)!

Places To Spot Dugongs In Australia

Moreton Island Off The Southeast Coast Of Australia

Moreton Island is just off the southeast coast of Australia. The island known for having diverse wildlife and dugong sightings is certainly one of them! The waters around the island are ideal for dugongs looking to grab a bite to eat.

They are herbivores and prefer to eat meals of algae and seagrasses. Part of their endangered status derives from the lack of seagrass in some areas of the world.

Clairview, Located At The Eastern Coastline Of Queensland

Back in 1997, dugongs frequented the Clairview area of Queensland so much that the area was given the title of “dugong sanctuary”. To this day, people can spot these shy marine creatures peaking above the surface for air or swimming in shallow waters.

Clairview is one of many small seaside towns that speckle the eastern coastline of Queensland. It is just over an hour south of Mackay.

Seeing dugongs in the wild at Clairview, Moreton Island, or Shark Bay is undoubtedly a great experience. However, the Sea Life Aquarium in Sydney provides visitors with a unique view of dugongs. Currently, they have a dugong there named “Pig” who is known for chomping down on cos lettuce.

He was rescued from the wild when he washed ashore and has since been protected and cared for at the aquarium. He showcases his species’ docile nature as well as their playful side! Visitors can buy special tickets which allow for unlimited picture ops with Pig too.

Even though catching a glimpse of a dugong isn’t that common, there are opportunities to see these magnificent marine animals! Whether it is at the aquarium or a sighting in the wild, dugongs are a memorable animal to see!

Are There Manatees In Australia?

are close relatives to the dugong. The biggest difference between the two creatures is their size. Manatees tend to be a bit larger than dugongs (although both can be referred to as ‘sea cows’). Even though they look pretty similar, manatees aren’t generally found in Australia.

They are known to frequent areas such as the North American east coast, Western Africa, and near the Amazon River.

Dugongs and manatees are both light grey in appearance and have a general shape that is the same. From far away, they could be mistaken for each other. Perhaps people have thought that they spotted manatees off the shores of Australia but that just isn’t likely considering they are mostly concentrated in Atlantic Ocean waters.

are sort of the eastern world’s “manatee” in a way.

Up close, their differences can be noticed a lot easier. First and foremost, their tails are different. Dugongs have tails that resemble dolphin fins while manatees have many flatter tails. Additionally, their mouths are quite different.

Dugongs have wider snouts that point downward and upper lips while manatees have shorter snouts that have split lips known as “prehensile lips”.

Even though they are very different, yet closely the same, both species are quite intriguing. The fact of the matter is, that dugongs will be found in Australian waters while manatees will be found much further west of the country.

Dugongs are an essential part of making Australia even more unique than it already is with its diverse wildlife. Moreover, the thrill of seeing one due to their rarity makes them even more alluring!

Learning more about dugongs is really exciting. They are one of nature’s more interesting creatures, especially for being marine animals. Below are some quick facts about dugongs!

They are considered vulnerable and endangered. This is due to a decrease in food sources for them, however, it isn’t the only culprit. Unfortunately, human actions such as hunting have lowered their numbers throughout the years. They are primarily hunted for their oil, meat, and skin.

Through serious conversation efforts, this species can be better preserved so that they don’t become extinct.

Dugongs are just one of many interesting marine creatures in the Australian area. Their shy personalities and elusiveness contribute to people’s fascination with them. For those lucky enough to witness their presence, it is a memory that will last a lifetime!