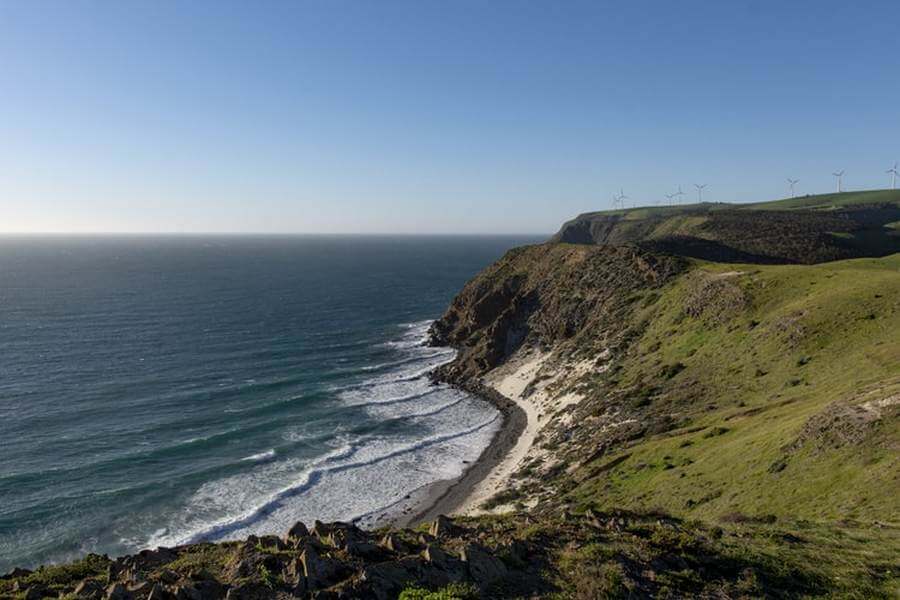 Every country has its own unique landscape that makes it iconic. This couldn’t be more true for Australia which is vastly beautiful and brimming with endless naturalistic sights. From coast to coast, Australia has so much to offer the natural world and this is particularly true for The Great Australian Bight

A bight, in simple terms, is a piece of coastal land (or another type of geographical landmass) in which its formation has a curve or bend. In some cases, like The Great Australian Bight, this curve or bend creates a bay area because it faces open water. This truly makes the bight even more fascinating!

The Great Australian Bight stretches an impressive 45,926 kilometres squared (or 17,725 square miles). The incredible size of this bight faces the Indian Ocean creating quite a remarkable bay area. Moreover, the cliffs of the bight are also large in size. These cliffs tower about 60-120m in height (or 200-400ft).

Between the size of the bight’s cliff and its overall length, it proves to be one of Australia’s premier spots to witness nature at its best! The view from the cliffs is considered one of the most idyllic views in Australia as it pans out into the bight’s bright blue waters.

broke apart. When this occurred, it separated Antarctica from Australia we know today. Due to this event and natural erosion throughout the years, the bight continues to be a coastal formation that is exceptionally impressive!

Why Is The Great Australian Bight Famous?

. However, these oceanic views aren’t the only reason the bight is famous! The bight also has an abundance of wildlife that generally aren’t found anywhere else. This specifically includes endangered species like the southern bluefin tuna.

Other wildlife species in the area include southern right whales, zooplankton, and much more.

The bight is considered a marine park as well, a title that certain spots around Australia gain through their geographical locations. Because the bight is a large part of the western, central, and southern coastline of Australia and encompasses such a large area jutting into the Indian Ocean, it has gained a marine park title.

Additionally, its diverse marine life within the park has also given it its title.

The marine park is part of the 45,926 kilometres squared that includes the bight itself. The depths of the park are known to be anywhere from 15 metres to 6000 metres which makes it even more fascinating. The various marine life in the park and the bight itself gives the southern part of Australia a lot to explore.

The bight is also famous for its surf spots. The beaches of the rock formations are known for having some ideal surf spots. Specifically, Cactus Beach at Point Sinclair near Penong on The Great Australian Bight is the most known spot for surfing at the bight.

There are two left-hand breaks and a right-hand break at the beach. Because of its location, only experienced surfers typically frequent the area.

The bight is also famous for its whale watching. While Hervey Bay

, a bit further to the northeast from the bight, is considered the whale-watching capital of the world, The Great Australian Bight has its own crown for whale watching. People gather to the bight every year to experience this natural phenomenon of whales entering the bight’s bay waters.

During the months of June to October, the bight experiences an increase in whale sightings. Whales are known to make stops along their migration journies to areas with warmer waters. This includes the bight as well as the Hervey Bay area. The southern right whales are the specific species that flock to the bight’s waters.

The southern right whales are known to give birth in the waters of the bight which makes the whale-watching experience even more unique for visitors. The area where whales are best seen at The Great Australian Bight is often referred to as “Head of Bight” because it is a central point on the stretch of cliffs and beach area.

Where Is The Great Australian Bight?

When looking at a satellite view of Australia as a whole, The Great Australian Bight is essentially the large portion of the western, central, southern coastline that curves in a slight horseshoe shape.

Overall, the bight is said to expand around 1,160km (or 720 miles) so no matter how you look at it, The Great Australian Bight is a remarkable place!

How Do You Get To The Great Australian Bight?

. This plain area is an open, vast sand area that is very desert-like in its appearance. It is practically treeless and seems to stretch for as far as the eye can see. Nullarbor Plain backs the Bunda Cliffs which are the cliffs surrounding The Great Australian Bight.

The plain can be reached via The Eyre Highway which runs from Port Augusta across Nullarbor Plain to Norseman in Western Australia. Travelling on the Nullarbor Plains is done best via a 4WD vehicle. The bight is greatly considered remote in its location even though it is massive in size.

It can take a while to get to the bight and the time to do so ultimately depends on which nearby city someone is venturing from.

The best route to reach the Head of the Bight (a visitor centre on the bight) is from the Eyre Peninsula travelling northwest through Port Augusta to Ceduna. From Ceduna, guests should travel west along the Eyre Highway towards the Western Australia border.

The viewing hour and visitor centre is just under a 4-hour drive from Ceduna. If coming from Adelaide, the trip is around 12 hours. For those who aren’t looking for an extensive road trip, it is possible to fly to Ceduna and just travel the 4-hour drive via a rental car.

Even the drive is a bit extensive, it is well worth the trip! Some people compare standing atop the jutting cliffs of the bight as feeling like they’re at the edge of the world. With stunning views of the open ocean and massive cliffs all around, it is easy to see why they would feel that way!

Is The Head Of The Bight Open?

The Head of Bight (or Head of the Bight) is a central area among the cliffs that face the Indian Ocean where guests can really take in the vast beauty of the open ocean. Moreover, this is an iconic location for seeing the southern right whales that come to the waters just below the bight.

Below is the contact information and hours of operation for the Head of the Bight!

This remarkable visitor centre provides guests with a paved road and car park area just off the Nullarbor Plains. This area even includes picnic areas and toilets.

Are There Whales At Head Of Bight?

As expressed before, The Great Australian Bight is held in high regard for being an iconic place to view whales. The Head of Bight sits perfectly among the cliffs at the bight which gives guests ample views of the waters below. The whales are best viewed from the Head of Bight, so yes, there are whales here!

Considering the visitor centre for the Head of Bight is only open during the whale-watching season is further confirmation of whales being visible from the location.

Visiting Head of Bight from June to October truly provides guests with breath-taking views of the southern right whales. Experiencing Australian wildlife is truly a once-in-a-lifetime occurrence and whale-watching (whether it’s here or Hervey Bay!) is a unique wildlife experience all its own.

There is something fascinating about seeing the whales frolic in the waters of bay areas during their migration. Places like Hervey Bay and The Great Australian Bight are sought after by whales because the waters are the perfect warm temperature for birthing and resting before continuing their migration journey.

Whether it is for the whales (or other marine life!) or the majestic views of the Indian Ocean, The Great Australian Bight is a must-see. It’s another part of why Australia’s naturally occurring landscapes are an essential part of the country’s overall beauty!