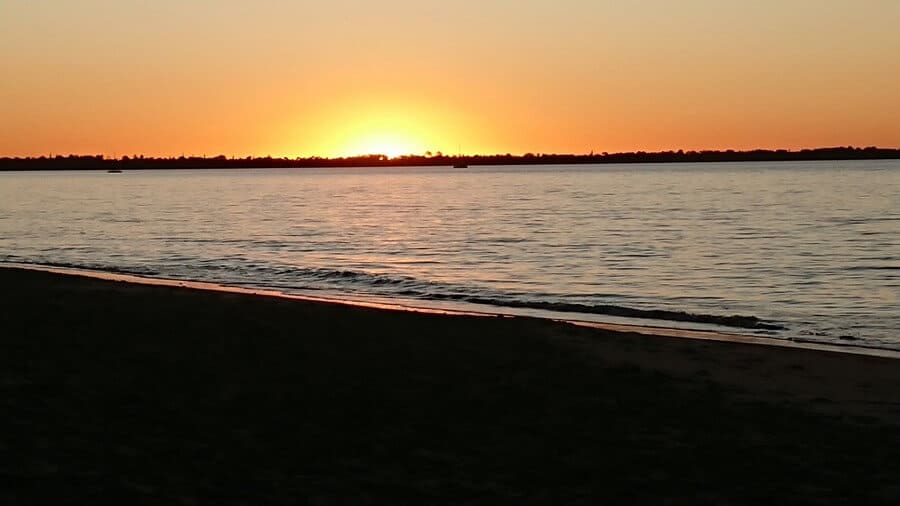 Nature amazes us in many ways, mostly from its stark beauty. Some of the most beautiful things on the entire planet happen directly in nature. One of the most interesting of those things includes the sunset.

Sunsets are a gorgeous art display that happens every evening for the world to see. Specifically, they splash bold, vibrant purples, peaches, and yellows across the sky’s horizon as the sun disappears for the night.

Witnessing a sunset is always an opportunity to soak in the natural way of the world that invokes such calm and blissful feelings.

While the absolute beauty of a sunset is truly moving for people, others often ponder what it actually means for the sun to set. Most times, sunsets are viewed along the shorelines of beaches.

Australia is known for having some fantastic views of sunsets off one of its many popular beaches. Those who question what it means for the sun to actually “set“, usually think of the sun setting over the ocean.

Sunsets from the ocean are ridiculously idyllic as the sun lowers against the horizon and seemingly melds right into the vast ocean.

Does The Sun Always Sunset Over The Ocean?

Sunsets occur all over the world. Where the sunsets are entirely dependent upon where are you in the world. In places like Australia, where there are beaches just about everywhere, people search for the ultimate place to view the sunset.

Watching the sunset over the ocean is arguably the best way to experience it. This simply means that the sun is setting with the vast, open ocean right below it. For Australia, the sun always sets over the ocean in its western areas of the country.

People in places where mountains are will experience sunsets over land rather than the ocean. The fascinating point behind a sunset is that the sun always sets in the west, no matter where people are in the world.

The only direct change that occurs is the time of day it happens and whether or not it is over land or sea.

For the places where the sunset occurs over the ocean, it happens because the waters tend to be in a westerly direction in relation to the land. With this in mind, Australia has pretty incredible sunsets to witness.

But where are the best sunset views in this beaut country? Below are some of the spots to see the sunset over the ocean!

It should come as no surprise that Western Australia has some of the most iconic views of the sunset. This western part of the country is famous for its truly amazing sunsets. Cable Beach

in Broome is one of the popular spots to see the sun setting.

Views of the sunset from Cable Beach usually transpire into deep oranges and yellows with the sun appearing larger than life, dropping behind the horizon of the ocean.

might be in the southern part of the country, but it faces the west. The golden ball of the sunset appears over its waters giving it a big advantage over other areas in southern Australia.

The beach itself, as well as Port Phillip Bay where it is located, is a gorgeous place to visit! The sunset only makes it better!

This sandstone rock cut into the shape of a chair

sits directly in Sydney Harbour. With a choice between this sandstone, Harbour Bridge

, and the Opera House for viewing the sunset over the waters of the harbour, there is plenty to see.

While the area is stunning all on its own due to the various structures, like the Opera House

, the stone chair, etc, the sunsets are just as stunning!

It is important to note that places on the eastern coast of Australia, like Queensland, do not have sunsets over their waters. Rather, sunrises happen in the early morning hours. Sunrises are gorgeous too, but sunsets are more sought after due to their bold and bright hues.

Does The Sun Always Set In The West?

The sun always sets in the west. No matter where someone is in the world, the sun will set in the west. But why? Simply put, the sun appears in different parts of the world at different times, but the direction in which it is appearing remains the same.

The reasoning behind this is that the Earth spins on its axis to the east. Because of this, no matter if someone is in the Northern Hemisphere or the Southern Hemisphere, the sun goes down for the night to the west.

Where Does The Sun Go When It Sets?

When the sunset occurs over the ocean, it appears to flow into the ocean. The bright orange and yellow setting sun seem to meet the water and melt like ice cream on its surface.

While this illusion is romantic, majestical, and quite fantastical, it is simply that; an illusion. People often question just where the sun goes when it sets, even those who witness it from land rather than the sea.

The science behind where the sun goes as it sets lies right within the Earth and its rotation. The sun doesn’t actually go anywhere. While it is true that the planets, moon, and sun are moving within the universe, the overall position in relation to other planets, etc doesn’t change.

When the Earth rotates on its axis to the east, the surface of the Earth is moving. Because of this, the surface faces the sun and moon at different times.

This is why in certain parts of the Northern Hemisphere

, daytime is different from nighttime. When it is nighttime in one place, it is daytime in another place.

Even though the sun doesn’t technically go anywhere when it sets, the sunset is still a miraculous thing. The sunset provides a romantic setting and an overall peacefulness.

It is one of many ways that nature shows us how incredible the Earth can truly be, especially in the idyllic country of Australia!