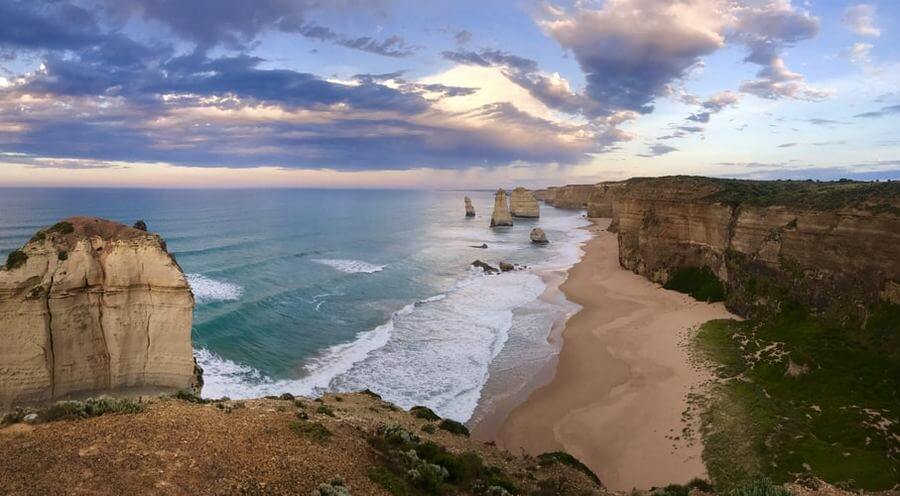 All over Australia, there are fascinating works of nature that showcase the country’s compelling natural attributes. From islands just off the coastline to landscapes dotted throughout the country and everything in between, there’s no denying that Australia is a land of wonder and beauty.

One of the country’s most remarkable features is its Great Ocean Road.

is a coastal road that winds 243 kilometres (151 miles) through the southern state of Victoria in Australia. Specifically, it runs from Torquay to Allansford along what is called the “Surf Coast”.

Travelling The Great Ocean Road is a stunning sight in itself, however, along this ocean road are some key points of interest that draw in visitors. This particular key point includes the Twelve Apostles.

However, these towering limestone structures are much more than just something to see while driving the Great Ocean Road. They are an experience for guests to feel a part of Australia’s contribution to the world’s amazing beauty.

Great Wonder Of The World

There are many great wonders of the natural world, some with titles given to reflect this as well. The Twelve Apostles

area natural wonder all their own. Great wonders of the world are areas in the world where nature has taken the reigns and presented the Earth with forms of art that simply couldn’t be replicated anywhere else.

The Twelve Apostles in Victoria certainly live up to this as over many, many years they have been exposed to erosion which has given them their iconic shapes.

The limestone stacks were once an arch that over time became the towering stacks that we now see today. Originally, there were 9 stacks (despite their namesake of “12 Apostles”) but now there are only about 8 of them. Erosion is a process where wind, rain, and water break down larger pieces of stone or landmass that results in receding features.

The stacks of limestone have been subjected to many ocean currents and waves from the Southern Ocean, just off the coastline of Victoria which has given them their towering shapes.

Erosion is a natural occurrence all throughout the world. From how beaches are formed to how mountains are shaped, erosion simply plays a large role in making every landscape very unique. What is even more fascinating about erosion is that it is continuous.

No area of the world that is exposed to erosion is ever truly free from it, so the landscape eventually changes to create a whole new sight.

In concerns to the Twelve Apostles, erosion breakdown of the softer spots of limestone have developed the stacks and unfortunately caused their destruction as well. Throughout the area where they are found, there are other limestone stacks, however, the Twelve Apostles are the only ones that stand around 45 metres tall.

Considering the many, many years that the limestone has been subjected to erosion, it is quite remarkable that these particular stones still stand so tall.

Below are some interesting facts about the Twelve Apostles and the area where they are found!

The Twelve Apostles Will Get Smaller Over Time

Erosion never stops. That’s because mother nature is relentless and unpredictable. Wind, rain, and ocean currents will always be an ever-moving forces. Because of this, these remarkable stacks will get smaller over time. Their continuous exposure to erosion will continue to whittle away at their surface, reducing their size and eventually causing more collapses.

The Twelve Apostles Are Backed By Massive Cliffs

The Twelve Apostles sit situated in the Southern Ocean of Victoria and are backed by incredible large cliffs. These cliffs reach about 70 metres in height. The cliffs feature various boardwalk walkways that allow guests to view the rock formations below. The sights at the cliffs are simply breathtaking and present idyllic photo opportunities for guests!

Cliffs And Various Caves Found At The Twelve Apostles

The cliffs and the rock formations in the ocean have certainly shown signs of natural erosion. However, their distinctive shapes aren’t the only ways in which erosion has affected the area. The cliffs have caves embedded within them from erosion as well. These caves aren’t generally accessible to the public.

The best way to view them is by taking a helicopter tour of the Apostles where they can be seen from the sky. That adventure is a whole different type of thrill!

The visitor centre at the Twelve Apostles is atop the cliffs that have boardwalks for viewing the ocean. It features toilets, refreshments, general displays, and even a boardwalk access area for the disabled. The centre is open every day of the year from 10 a.m. to 4:30 p.m.

The boardwalks that line the cliff’s edge to overlook the ocean and Twelve Apostles are open year-round which is nice considering the area sees over 2 million visitors every year!

The beach near the Twelve Apostles isn’t that safe. The currents are quite harsh and that is understandable considering how these formations were created in the first place. However, it doesn’t mean that beach access is completely off-guard.

There is a little beach access at Gibson Steps Beach, a protected section of the Twelve Apostles Marine Park

. This is the only section really considered safe for swimming or snorkelling.

A Section Of The Area Is A Marine Park

While the entire area isn’t a marine park, there is a section by Gibson Steps Beach that is a marine park. It is an estimated 7,500 hectares in size and features underwater sights like canyons, gutters, fissures, and steep-sloping reefs.

The part that reaches Gibson Beach allows for swimming and snorkelling to see some of these natural underwater beauties.

Aside from the underwater beauty that this marine park offers, the beachfront of the Twelve Apostles also is home to penguins. These penguins can be seen entering and exiting the caves in the cliffs as they nest in them. The best time to spot the penguins is in the morning hours.

There Are 4 Boardwalk Viewing Platforms

The wide-open ocean backsplashes against the jutting sandstone formations of the Twelve Apostles which is simply stunning. There truly isn’t anything quite like it in the world.

Access To The Lookouts Is Through A Small Tunnel

Access to the lookouts is through a 500m tunnel that goes under The Great Ocean Road. This small adventure to access the lookouts is quite a treat for visitors. Not only are the formations themselves fascinating but so is the entrance to see the best sight of them!

They Aren’t Just All Limestone Stacks

is a large part of the rock formations and cliffs that face them, they aren’t only comprised of limestone. They are also made of sandstone

. Perhaps one of the most interesting things about erosion is that it can break down any natural matter.

Because of this, it makes for interesting formations that can sometimes be made of various materials. Erosion breaks down matter but it also carries matter to other places. For example, that’s how beaches get their sand. So the stacks at Twelve Apostles not only have their beautiful forms but are made of more than just one type of rock.

It could be argued that any time of day is a good time to visit the Twelve Apostles. However, ideally, the mornings and evenings are truly the best. The cliffs and the Apostles themselves are as soft yellow, golden hue.

When the setting or rising sun casts its rays on the stones, the imagery is out of this world. Photos are an absolute must when visiting so that guests can capture the sheer beauty of the area!

Erosion has caused all the gorgeous shapes and grooves within the cliffs and Apostles but it is also a downfall of them as well. Nature doesn’t stop. It is always moving and this includes erosion. Just as erosion has given these cliffs and rock formations their beauty, they have also caused some of the areas to collapse as well.

It is estimated that the Apostles are losing up to 2cm of sandstone and limestone a year. That may not seem like a lot, however, it can really add up! This is really demonstrated

They Weren’t Always Known As The “Twelve Apostles”

The name “Twelve Apostles” doesn’t necessarily have a significant purpose behind it other than from a biblical standpoint. Originally, the area was referred to as “Sow and Piglets” because Muttonbird Island is nearby which represented a sow with the stone stacks appearing as her piglets.

The name change isn’t documented well and some people from the area still know it as its original name. Overall though, internationally and domestically, the “Twelve Apostles” name stuck.

There’s no denying that the Twelve Apostles are remarkable. From their recognisable shape and size to their alignment in the waters facing the mainland, these formations are one of the most important parts of what makes Australia naturally beautiful.

Why Are The Twelve Apostles Important?

The Twelve Apostles are important because of how they contribute to the landscape of Australia. They are one of many locations throughout the country that presents such a unique type of beauty that can only be found in nature. Erosion is a work of art that is never quite the same and that is what makes it truly fascinating.

Without the power of mother nature, the Twelve Apostles wouldn’t be as fascinating. Moreover, the rock formations and the cliffs make the coastline of the Port Campbell National Park incredibly stunning!

How Old Are The Twelve Apostles?

The age of the Twelve Apostles is a bit of a mystery. It is estimated that may be about 20 million years old. While this number isn’t exact, it can be said that they are millions of years old due to how they were formed. Erosion is not a quick process.

Even though erosion is a continuous process, the process itself is quite extensive. For the Twelve Apostles to get their chiselled rock shapes, it would have taken millions of years. This is especially true since they started out as an arch that later became free-standing rocks.

The Twelve Apostles won’t always be there but at least for now, they are a huge part of what makes Australia the stunning beauty that it is!

Australia is well known for its wide abundance of beaches, but Bells Beach is easily crowned as the king of surfing. This famous seaside area is located in Victoria 3228, Australia. More...