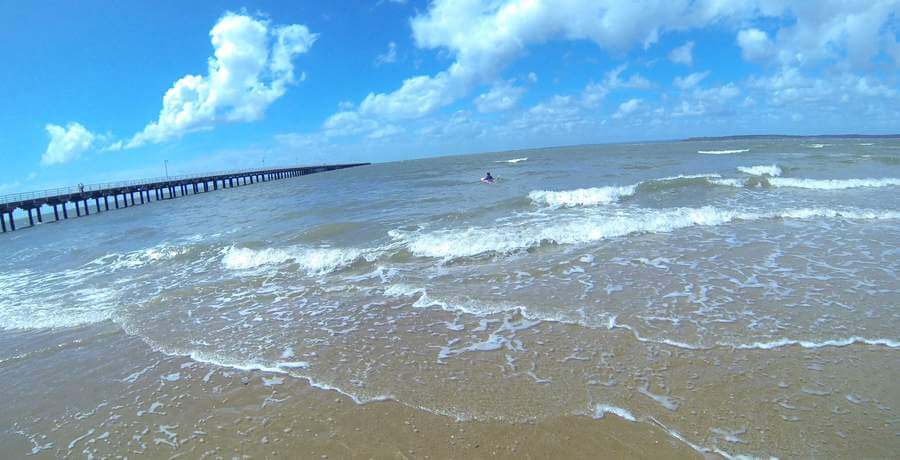 Any trip to the beach is thrilling as there’s so much to partake in! However, two of the most popular beach activities include surfing and bodyboarding

Both sports require a little bit of talent but mastering their techniques can be accomplished through practice and patience. These activities are not only exciting but a great way to get some exercise.

When comparing bodyboarding to surfing, bodyboarding is said to be easier than traditional surfing. This is due to it being a laying down sport rather than standing up. Both methods of catching a wave can be truly exciting for anyone, though!

Waves from the ocean are incredible to see from the shore. However, getting to experience them while in the water is a thrill that simply can’t be put into exact words.

The two main methods of riding these waves are known as surfing and bodyboarding. Surfing has an incredibly longer history than bodyboarding and has been popular for many decades.

is credited with the first invention of bodyboarding. This invention truly set forth a new wave (pun intended!) of interest in watersports, particularly pertaining to waves.

Some would argue that bodyboarding has a longer historical record than surfing, using a paipo board as reference.

While paipo boards are ancient and were used to ride waves on one’s belly, Tom Morey’s model is a modern and more efficient bodyboard and really placed bodyboarding as a watersport on the map.

With this invention came a whole new way to experience riding a wave. While bodyboarding may be considered easier than surfing, there are some who have a lot of passion for this watersport.

Bodyboarding has taken on a lot of transition throughout the years. It has become more of an art form over surfing.

Surfing may have decades behinds its purpose, however, bodyboarding has proven itself worthy of becoming a respected watersport all its own.

Moreover, bodyboarders who are dedicated to the art of the sport have become acrobats in the water. They have created new ways to maneuver waves that give it a visually appealing appearance.

These maneuvers aren’t easy to master, however, with the way bodyboarding can be done, it makes it easier to do these moves when bodyboarding rather than surfing.

Difference Between Bodyboarding And Surfing

While both methods are great ways to ride some ocean waves, there are some key differences between the two watersports.

As expressed above, bodyboarding is known to provide easier access to doing certain tricks within riding a wave over traditional surfing.

When bodyboarding first emerged, surfing spots weren’t so taken by the sport. There will also be those who hold surfing near and dear to their hearts and vice versa for bodyboarding.

Either way throughout the years, both sports have gained their followers and respect for one another.

So what exactly are the differences between bodyboarding and surfing? The key differences that set these two watersports apart are one is a standing sport the other is laying down, It’s said there is a greater speed when you are closer to the water. Catching a wave is easier when bodyboarding.

Closer experience to the water – There’s something special about being eye level with the water. It is a seemingly more immersive experience.

Speed increases – With the addition of swim fins, the speed of riding a wave drastically increases. Swim fins propel people faster throughout a wave.

Boards are durable – Bodyboards are stiffer and more flexible than surfboards. This makes them more durable to handle various waves and dings from ocean debris.

Closeout waves can be ridden – Closeout waves are identified as being waves that break all at once from one end to the other. Because there is no horizontal aspect to these waves, surfers aren’t able to access them. Only bodyboarders can take advantage of these fun, vertical waves!

Air is easier to catch on a bodyboard – Because propelling is the main aspect of storyboarding, it is easier for bodyboarders to catch air and get high on a wave than surfing.

Fitness is a must – Because surfing requires a surfer to be standing, there is a lot of fitness needed to achieve a great surf. Being in good shape ensures that all aspects of surfing can be accomplished.

This not only includes the standing part of the sport but also the balance portion. Bodyboarders should be in shape as well, however, bodyboarding does not rely mainly on the balance power of its user.

Balance is key – The ocean is a relentless lass and waves can be really challenging. For surfing, balance is everything. Standing up while a crazy wave is pushing the board can be difficult. The ability to balance on the surfboard while riding a wave takes some serious effort!

Boards are artful – One of the biggest arguments in the great surfing vs. bodyboarding debates is about the board itself. Surfboards in the modern world are being mass-produced to be made from polyurethane foam and then be covered by fibreglass cloth.

This is being done to produce stronger surfboards. However, surfboards are well known for being handmade out of wood adding a bit of artistic feeling to them. Some still swear by a handmade board.

When the waves are more vertical, the distance on the wave width is shorter, providing a short period of time to really ride a wave out. This is where bodyboarding comes in handy.

While there are some major differences between surfing and bodyboarding, both watersports can provide a lot of fun. They both can be mastered, however, they are suitable for any skill level from expert or pro-surfer to beginner!

After all, learning is part of the excitement as well! Both end up being a rewarding activity to learn!