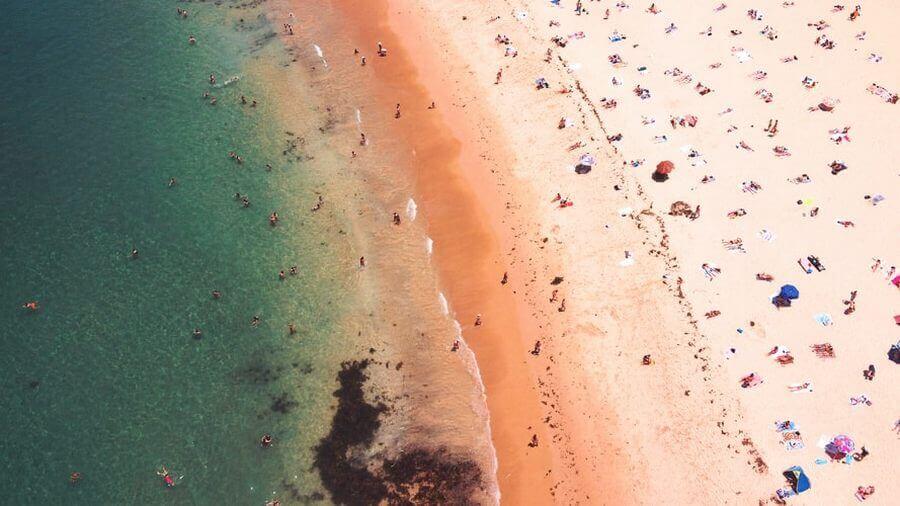 The beach is such a beautiful place to visit. In fact, the beach makes for a great getaway from everyday life. You may find yourself daydreaming about relaxing on the beach watching the ocean waves roll in. When it finally comes time to make that daydream a reality, it is nice to know about certain beach accessories. This is particularly true for beach towels.

There’s nothing wrong with using a regular towel at the beach. If it’s all you have access to, regular towels can be a perfectly suitable substitution. Considering bath towels are generally much shorter than beach towels, it is also a good idea to double up on the number of bath towels you bring.

In doing so, you will be providing a larger area for you to relax. More space is always ideal! This is especially true if you are bringing the whole family to the beach.

Another perk to using a regular towel at the beach is that it is much more absorbent. If you decide to swim for a while, regular towels will do a better job of drying you off. This isn’t to say that beach towels aren’t absorbent.

Beach towels are an effective way to dry off after a swim but they aren’t going to do as good of a job drying you off as a regular towel would. Although something to keep in mind is that a damp beach towel can be refreshing on a hot day at the beach. Even still, it can be acceptable to use regular towels over a beach towel if you want to or if you have to.

Click here to buy the only beach towel worth buying

What’s The Difference Between A Beach Towel And A Regular Towel?

Not all towels are made equally. For some people, a towel is a towel but the truth is regular towels and beach towels do have distinct differences. It is important to know the differences so that you can make an informed decision about what type of towel you wish to bring to the beach.

Beach towels come in a wide array of colours and designs. They are often bright and decorative which really gives them a bigger appeal over regular towels. Regular towels are almost always going to be a solid colour.

Regular towels will also usually be neutral colours like black, white, brown, blue, etc. If you’re looking for something with a bit more excitement to it, beach towels will always deliver with their various bright colours and patterns.

Beach towel patterns are usually ocean-themed and feature seashells, sharks, fish, sunshine, palm trees etc. The possibilities are practically endless. Moreover, the patterns are suitable for adults or children and there is often a wide range of patterns to cater to both age groups.

Whatever the choice, beach towels will always have a better selection of patterns than regular towels.

Beach towels are much thinner than regular towels. The primary reason behind this is because both towels serve a different purpose. Regular towels are fluffy and thick because they are designed to absorb a lot of water after a shower or bath. Beach towels are thinner because people are simply sitting on them or using them as protection from the sun.

Even though beach towels are much thinner, they still are absorbent. As expressed before, damp beach towels are such a treat on a hot day at the beach. The thickness of a regular towel might keep you warmer than you’d like. Ultimately, to stay cool, choosing the thinner beach towel is a better idea.

Beach towels on the other hand are generally laid out on the sand for people to lay down and relax. To ensure there is coverage for someone laying down, beach towels are always going to be quite longer than regular towels.

There’s A Distinct Price Difference Between The Two Towels

More times than not, buying a single beach towel could be more cost-effective and get a lot of use. You are paying for a larger towel that will be long-lasting. Regular towels can be long-lasting as well but once again, they can be more expensive since they are usually sold in sets or at higher prices individually.

Even though beach towels are used to cover the sand on the spot you’ve picked on the beach, they serve many purposes. Beach towels can be used as cover-ups around the waist. They can be used to create a shaded spot from the sun.

Beach towels can also be used to rest your head if you’re laying down on the beach. There really is no limit to what a beach towel can be used for. This is due to their overall length which is suitable for maximizing their uses.

While beach towels and regular towels have some very distinct differences, they both have their appeal. Ideally, you should use a beach towel at the beach due to all its benefits. However, if a regular towel must be used it can be done.

What Can I Use Instead Of A Beach Towel?

Things To Use Instead Of A Beach Towel

Use A Large Blanket As An Alternative To A Towel

Large blankets meant for beds or couches are a great alternative to beach towels. While the blankets aren’t going to dry you off very well, they can be used to provide shade and protection from the hot sand. The best part is that large blankets can cover more sand giving you more space to sprawl out too.

They can also be folded to suit a smaller area as well while still be an effective means of shade or protection from the sand.

We’re always upgrading our bedsheets but there’s no reason to throw out all of the old bedsheets. Like larger blankets, they can be spread out or folded to fit a smaller area. They are usually thin, much like a beach towel, which can be quite comfortable and help keep you cooler in the hot sun.

Once again, they aren’t absorbent so their use is strictly for sand coverage or shading.

Bedspreads are different from bedsheets and blankets. The biggest difference is bedspreads are much thicker than blankets or bedsheets. They are perfect for spreading out at the beach and having ample room to relax. Their thicker material may be a bit hotter than other alternatives, however, they will be quite comfortable with all the cushioning they have.

While these three alternatives are similar, all three are slightly different from each other. They might not be able to dry you off but they will serve a purpose!

Some sands can become quite warm in high temperatures so having something between yourself and the sand you’re laying or sitting on is really critical. Even though a beach towel is ideal as it can be used for other things, there are other things to use in its place.

A towel isn’t just a towel and beach towels prove to be a bit more superior to regular towels when visiting the ocean. They are multi-use products that are also fun and bright in their colours or designs. Even though beach towels are the best towels to use at the beach, regular towels can be a substitution (along with blankets, etc).

Click here to buy the only beach towel worth buying

Overall, when a quick decision is made to visit the beach, don’t hesitate about going if you don’t have an actual beach towel. The thrill of going to the beach should still continue on!