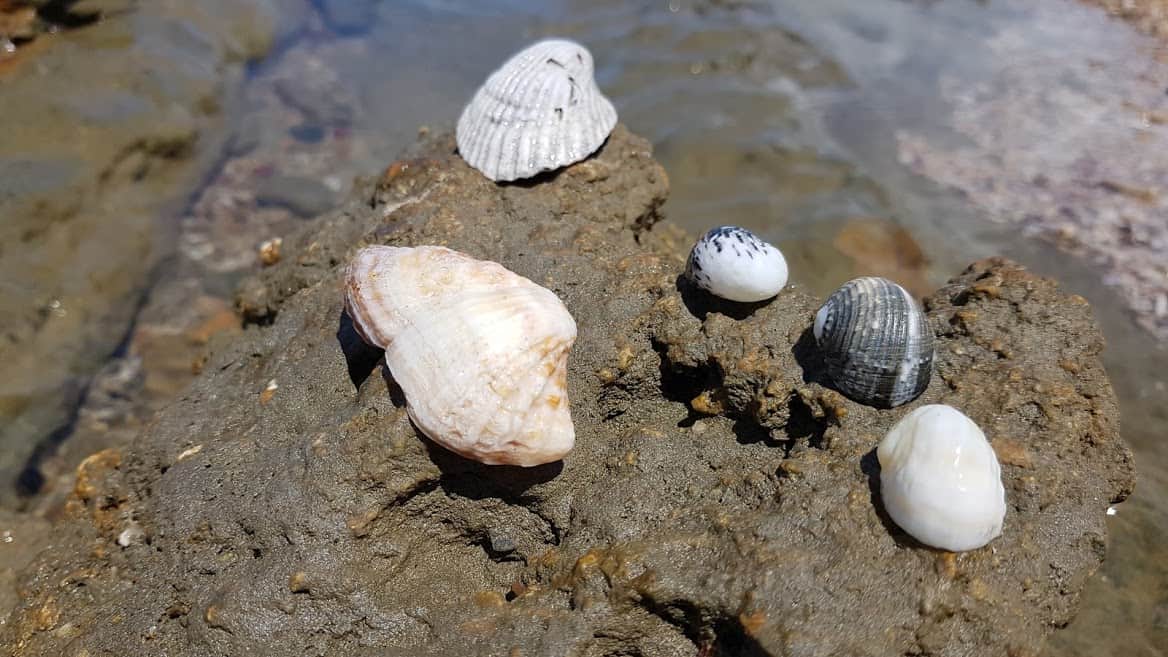 Seashells are often beautiful mementos of a family trip to the beach or wonderous dive. They’re more than just pretty keepsakes. In every seashell is a story of life.

They are used as the hard, protective outside layers for some animals that live in the sea. Most shells are part of the body of an animal. They are usually an exoskeleton of invertebrates (animals without a backbone).

Many types of gastropods produce their own shells, however, some, such as hermit crabs are born without an adequately protective outer layer.

So these animals find abandoned shells that once belonged to snails or gastropods, and crawl inside them to protect their soft abdomens.

Hermit crabs use their curved body to hold onto the central column of a shell.

Why Do Gastropods Live In Shells?

When you find shells washed up on the beach, they’re usually empty. This is because the animals inside have died and been eaten by other sea life, or decomposed away. If you want to learn more on the most expensive seashells click here.

There are six main classes of sea animals with shells, known as Mollusks.

, Tridacna gigas. The word Clam is a broad name for several Mollusks. They have two cup-shaped hinged shells, or valves, of roughly equal size, and joined together by two adductor muscles.

They also have a powerful foot used when they are a young clam for mobility, and then once they are older they use it for burrowing as the clam matures. While some clams may only have a life cycle of only a year, others can grow to be centuries old.

Giant clams are found to live in the East Indian and West Pacific Oceans, they are found anywhere from Thailand to Western Australia, Micronesia to Japan, and from New Caledonia to The Great Barrier Reef.

They are so heavy that it virtually makes it impossible for them to move and when they do get larger it’s quite common for them to be unable to close completely.

Gigas clams muscle is known to have four to five ribs and are a smooth shelled creature, rather than the rough surface we see of common clamshells that wash up.

Exactly How Big Can A Gigas Clam Grow To Be?

Well, have you ever had a bowl clam chowder soup? Imagine those delicious little bite-size morsels of clam meat being the size of a french bulldog.

Pretty big, right? Well, you’d be surprised they are even bigger, stand up and stretch out your arms as far as they can go, now that is how big the Gigas clam can really grow!

Some of these clams with their twinned shells have been known to grow over a meter across and weighing as much as 200 kg, to put it into perspective that’s as heavy as two large polar bears.

The biggest recorded Gigas clam on record weighed in at 230 kg (when it was dead), suggesting that when it was alive it weighed in at 250 kg and measured in at 1.37 meters (4.5 feet) across, so about as tall as your standard fridge.

There’s some dispute whether this is the biggest, as another contender, while this one only measured in at 1.15 meters (3.8 feet), it weighed an estimated 340 kg… making it as heavy as three polar bears.

How Do The Shells Move?

Most of a clam’s weight is in its shell with only 10% being in its soft parts. Despite this, clam’s aren’t born with their shells. They begin their life cycle as a larva, beginning to develop a shell.

So how do they move? Well, the larval form of a clam grows a foot-like appendage that it uses to move around the seafloor.

Once the clam finds an appropriate habitat, typically at one week old, it attaches itself to the shell to take its final form, thus becoming a clam.

While it is difficult to observe Gigas clams during their infancy in the wild, laboratories have raised clams in order to be observed, and have found them to grow 12 cm in a year.

Gigas clams have calcareous shells meaning that they are made up mostly of calcium carbonate with a small amount of protein, around the 2% mark. The shells are built in a trio of layers.

The base layer, called the nacreous, is closest to the inside of the clam. It contains a calcium carbonite material with specialized cells, making up the mantle tissue, creating materials to comfort the clam.

Then you have the second layer called the prismatic layer. This layer is what supports both the inner and out layer of the clam to give it support.

Then lastly is the periostracum layer which is a hard layer of the shell that we see on shells when they wash up on beaches, it is used to protect the clam.

It is a structural base for the mineralization of calcium carbonate. Due to sea conditions the calcium shell typically mineralizes into aragonite. Similar to a tree, the shell grows from the inside out, slowly expanding over the years.

The layers are calcified layers and a shiny inner layer of nacre. Nacre is the reflective part of a seashell often described as containing rainbows.

Calcium is what your bones are made out of and most commonly found in milk and dairy products, but can grow hard like your nails to protect the tissue underneath, just like on a clam.